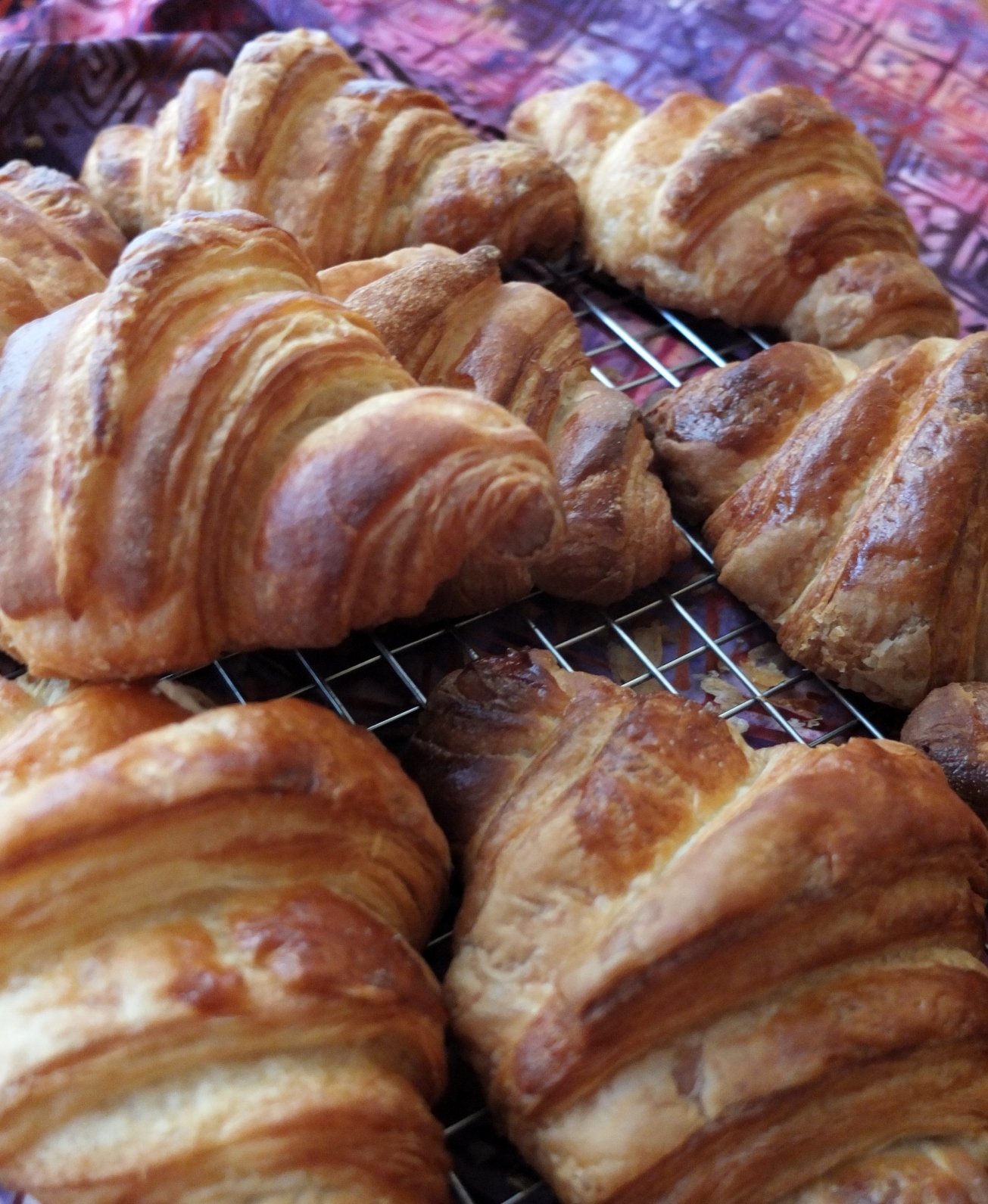 Did you know croissants didn’t originally come from France?  Apparently they were invented following an attempted invasion and some helpful bakers!  Will tell you the exciting tale later.  But today’s recipe is for croissants that have been ‘speltified’.  You can make them with plain or 00 flour, as I have many times with this recipe, also getting a lovely light croissant.  But spelt flour is easily digested so you can eat more of them!  And the croissants do actually rise and form that lovely soft honeycomb structure like your usual French croissant!  Vive les croissants! 🙂 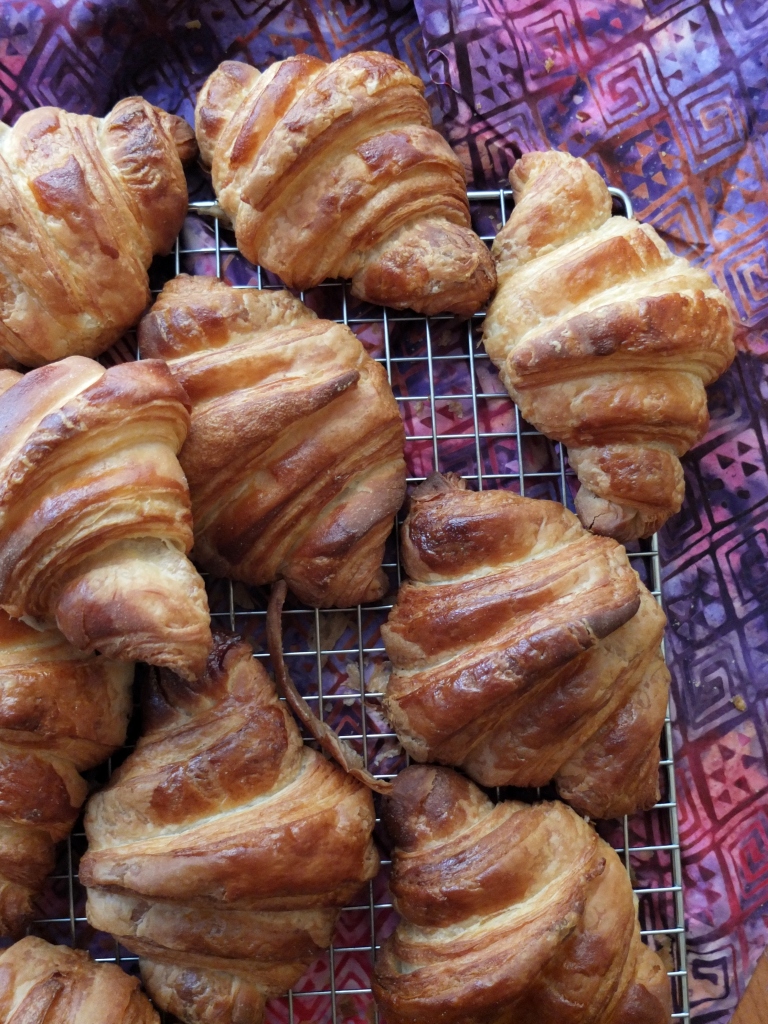 You might have noticed French croissants are very special and don’t seem related to some rather greasy and flat versions in supermarkets.  Which is why when I returned from Paris I missed them and was determined to make my own!   Unable to wait for autumn, I struggled during high summer with butter merrily oozing out of the pastry as I rolled, sweating away in the high 60-70% humidity of a Barcelona kitchen.  The croissants certainly proved rapidly but I don’t really recommend that kind of environment!   There were definitely issues with the structure.  Like was that a bit of honeycomb structure I could see there?  On the bright side I discovered that even when imperfect, homemade croissants are delicious! 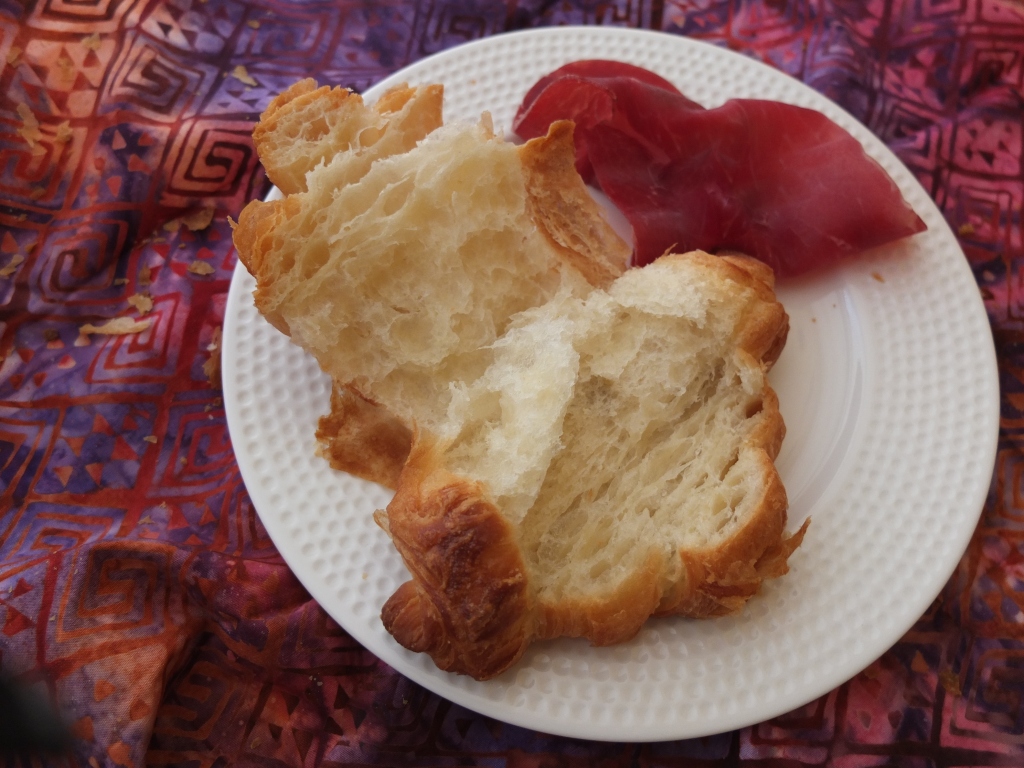 If you have half a day at home and can pop into the kitchen at 40-minute intervals to do very little rolling then do go for it!  Think fresh croissants, continental breakfast, lunch, tea, ham and cheese, cured beef, honey or jam!   Buttery flaky pastry on the outside but lovely soft honeycombed texture on the inside.  Shall we go to the kitchen and make some now?  🙂 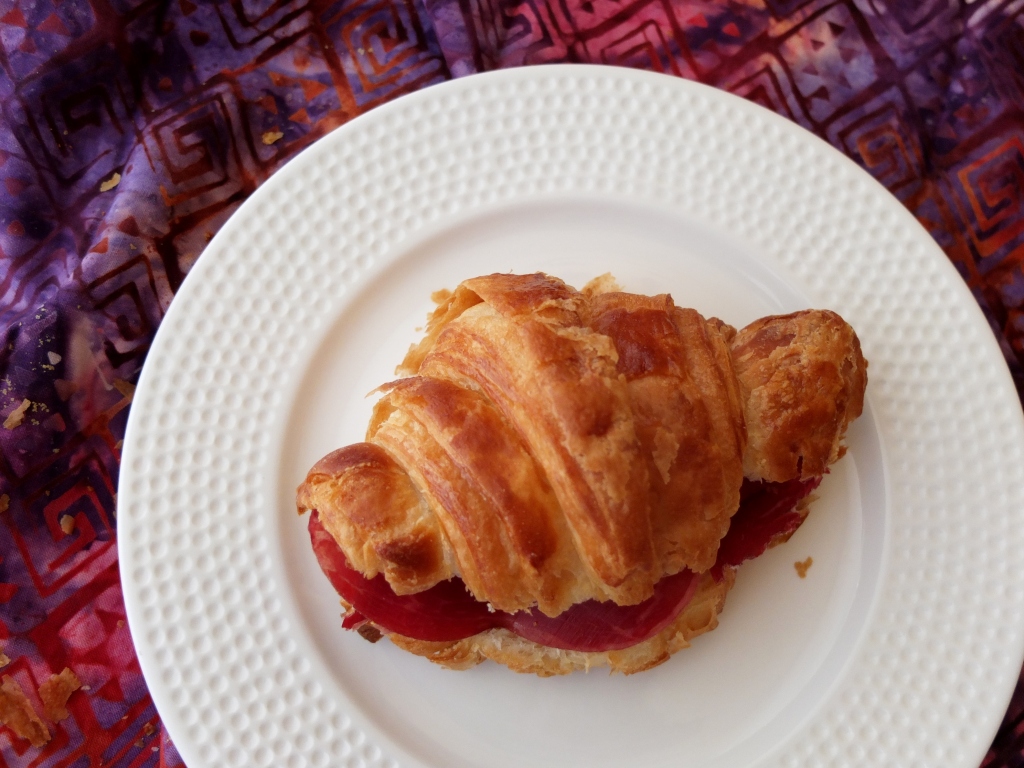 We’ll be following a recipe resulting from my kitchen experiments based on and inspired by a variety of sources, including patisserie books, information on the internet and the Cordon Bleu basic course. 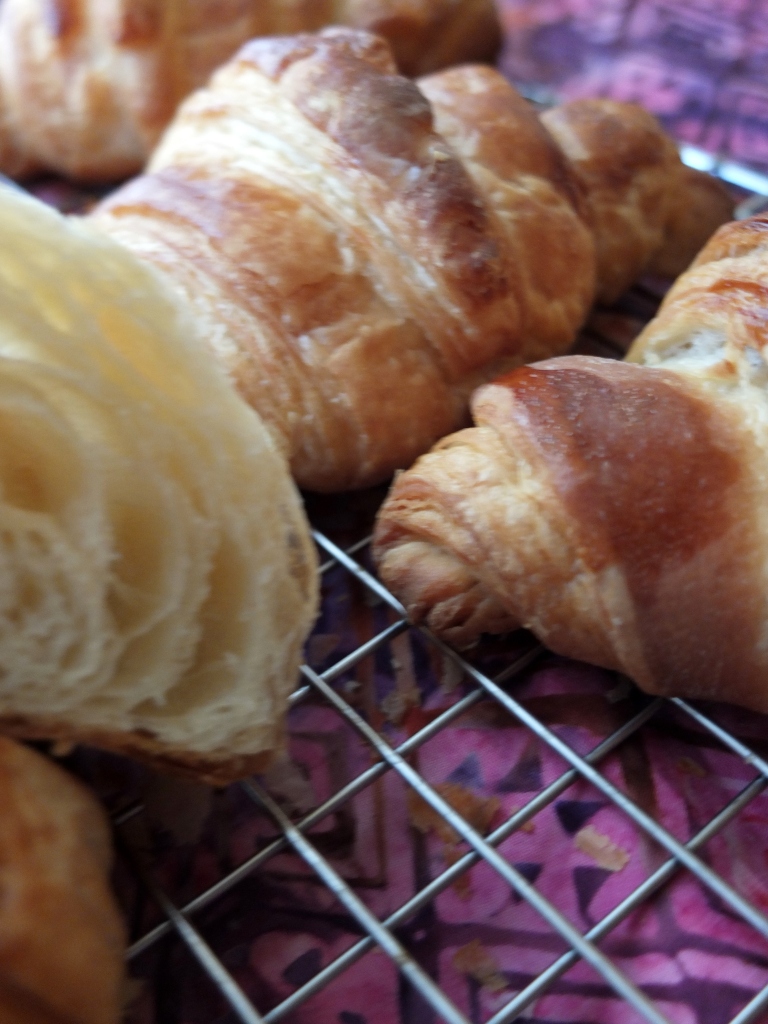 Ingredients for the Détrempe – try to use the finest and lightest white spelt flour you can find.  If your flour is coarse, heavy or even a little old then your croissants won’t have such a light honeycomb structure but you can improve the structure by having half white spelt-half 00 flour.  Use good-quality butter that doesn’t have a high water content, like Président unsalted butter.

Leave to rest in the fridge overnight. 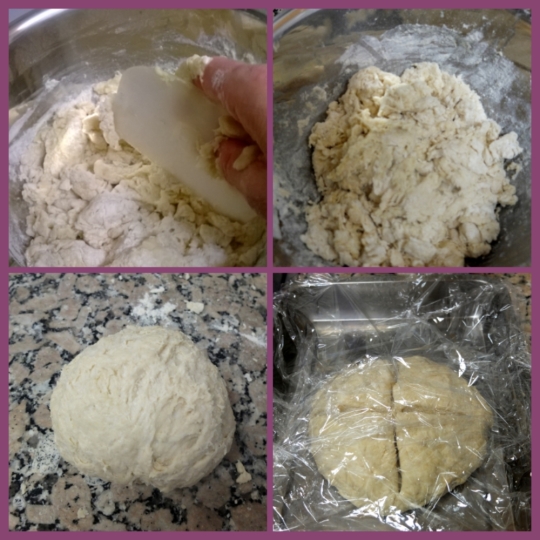 So you’ll need a stretch of about 6 hours.  It’s worth it and the actual work involved is less than 1 hour!  🙂

Ingredients for the turns

Eating and looking after your croissants

Store your lovely croissants in airtight tupperware containers when cool, or wrapped tightly in plastic film.  If eating within two days keep them out, but after the second day store in the fridge (or freeze up to a month or so).  You can reheat croissants straight from frozen in the oven for 6 to 8 minutes or so at 175°C (static oven) or 155°C (fan oven).  Still just as yummy!  🙂

How the croissant was born

A long time ago in 1683, Vienna lay under siege by the Ottomans and things didn’t look good for the Austrians.  According to legend, one night the Turks almost made their way right into the city by sneaking in underground.   But the hard-working bakers who were up all night heard the sound of their tunnelling and so raised the alarm and saved the city from invasion!  As a reward the bakers were allowed to invent a pastry to commemorate the occasion and chose to make one in the form of the Islamic crescent, the kipferl. 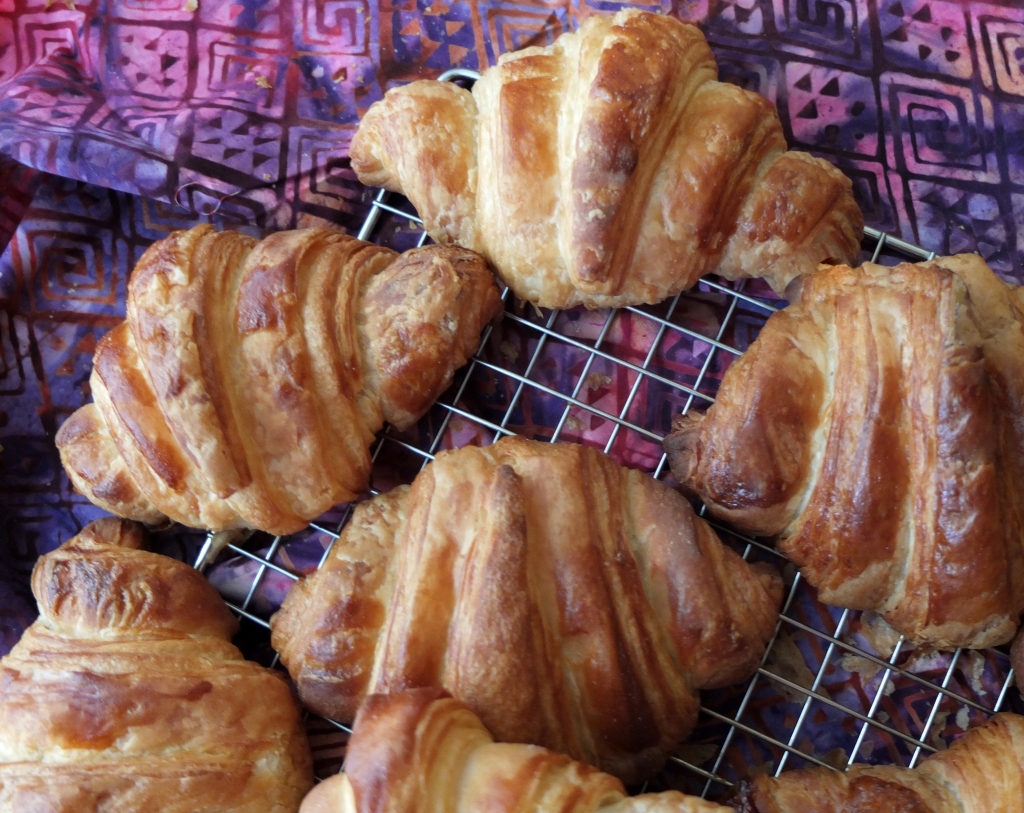 So how did the kipferl travel to France?  Well, you know Marie Antoinette?  Yes the queen who lost her head at the guillotine not long after her infamous exclamation ‘Qu’ils mangent de la brioche!’ (Usually translated as ‘let them eat cake!’).   The starving peasants were not impressed.  Well, she’d been more popular in earlier days and in 1770 when this 15-year-old Austrian Princess married King Louis XVI of France, the Parisian bakers made some kipferls to honor their new queen.  But they adapted them and called them ‘croissants’, the French word for crescent, so we can thank Marie for their arrival in Paris! 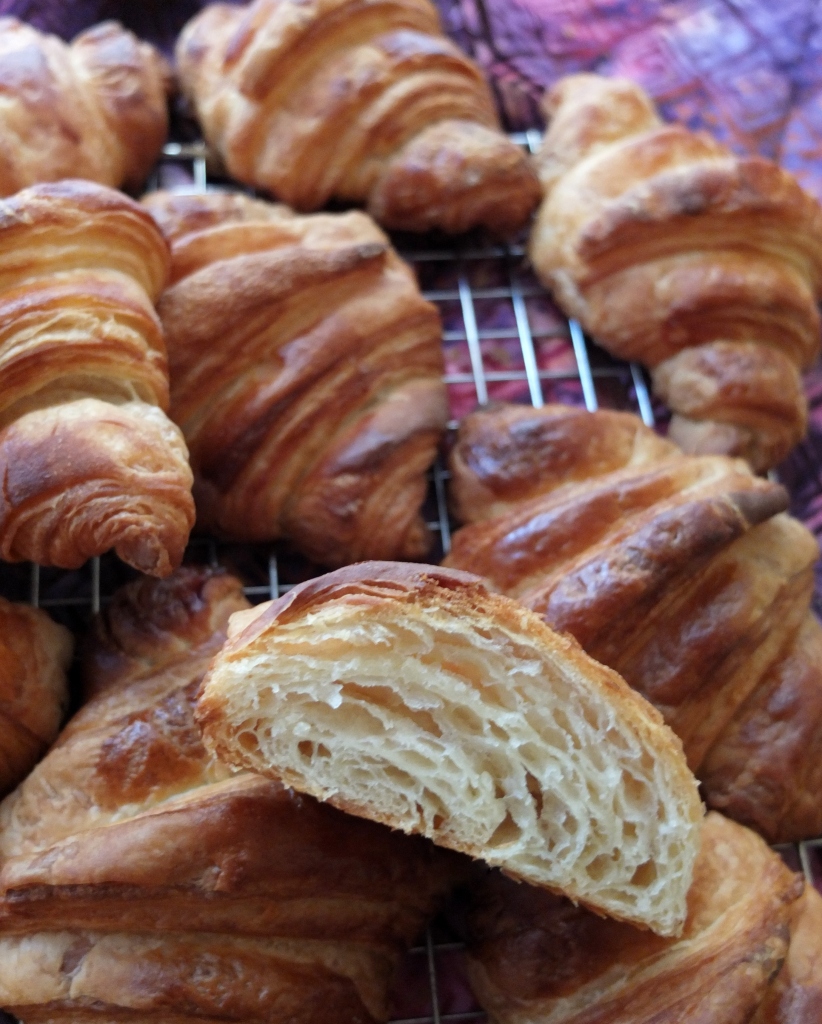 As you know, the Parisian croissant later became immensely popular worldwide and has obtained a starring role in the continental breakfast.  So hope you’ll seriously consider producing your own and partaking of a few.  If your first language isn’t English you could follow tradition and name them with the word in your language for ‘crescent’!

These ones are going to the wonderful Fiesta Friday party, hosted by Angie and this week’s co-hosts Justine @ Eclectic odds n sods and Jhuls @ The Not So Creative Cook – lots of brilliant food for everyone!   And they’re also going to the May Perfecting Patisserie blogging event hosted by Lucy@bakingqueen74, where you’ll find some lovely pâtisserie recipes! 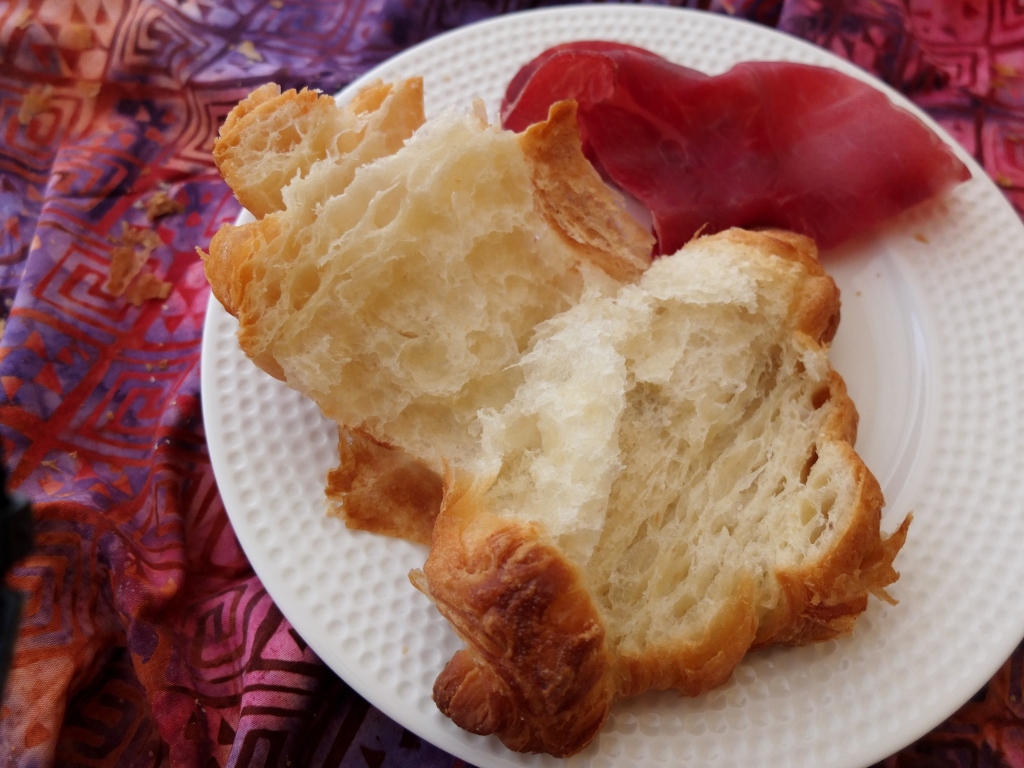 Wishing you a wonderful weekend sweet reader, with some great continental or traditional breakfasts!  Sausage, bacon and eggs, yum!  Sorry, croissant!  You know I love you too!  Oh dear, I’m speaking to my food again.  Best say goodbye now.  Happy baking, bon appétit and see you very soon!  Yes, speaking to you now lovely reader, not to the croissants! 🙂 x

58 thoughts on “Spelt croissants – or unspeltified! :)”