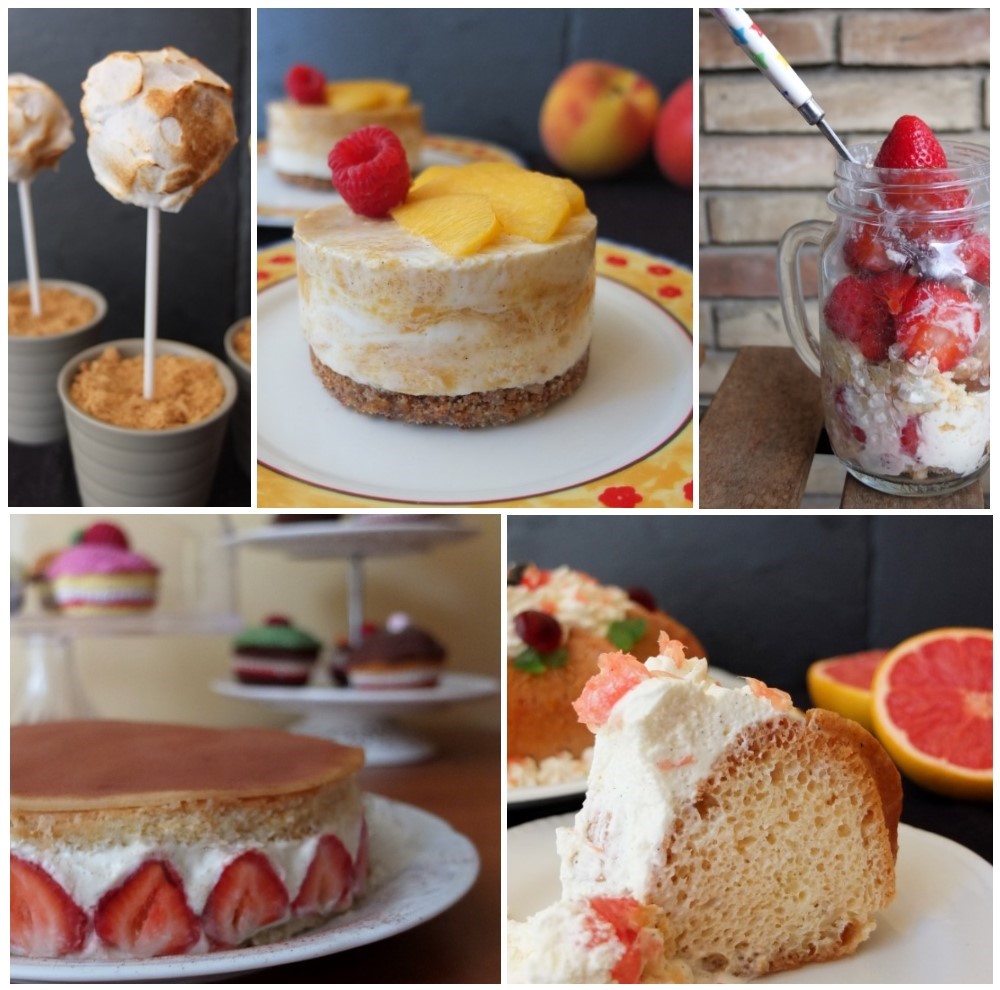 Ah the ups and downs on this rollercoaster ride through the kitchen creating fruity desserts.  One minute I’m swooning over my delightful refined sugar-free Grapefruit and kirsch savarin sweetened with maple syrup, combining a lovely balance of flavours.  Then suddenly I’m in the depth of despair with those … grrrr…. cake pops.  I’ve never even eaten a cake pop and was against them on the moral ground that they’re… um.. cake pops.  Then I saw some French pâtissiers making mousse balls in similar moulds so there I was passing through my local kitchen shop as you do (at least once a week) when I was seized by an impulse to buy the mould.  And now I rue the day.  Look, here it is.  Grrr… 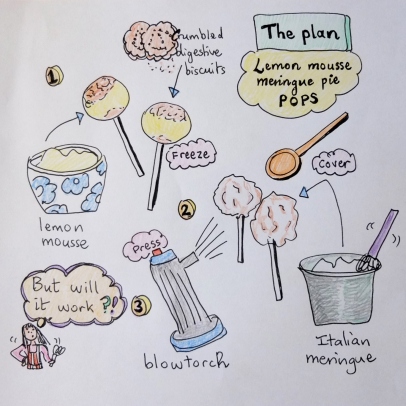 And me in despair.

Well, I couldn’t pipe the lemon mousse through the holes as planned because the holes were too small and the mousse was just running out down the sides of the nozzle.  So I just spooned it in 18 halves then stuck them together manually after they’d firmed up a bit in the freezer.  Making only 9 cake pops.  That was the first mini-crisis.

Then after an hour in the freezer the lemon mousse was separating and so soft the sticks were going through the balls and coming out.  Some fell to their death.  I also ate one for taste quality control.  Then there were 6.  Something had gone terribly wrong with the gelatine.  They were so unstable I added mascarpone (silly me) and quickly ushered them into the freezer.  A few hours later things started to look up.

It was already evening but they seemed ready so the Italian meringue was whipped up to cover the naked cake pops.  My blowtorch was aimed at their white fluffiness when it fizzled out.  Out of gas.  Aargh.  Off I went to that local kitchen shop.  While cursing them for providing me with the mould.

I came back to find two meringued cake pops had softened in the fridge and decided to slide down their sticks.  Wheeee… plouf.  I wish I’d thought to take a photo.  Anyway, that left 4 survivors.  I can’t even remember what happened to number 4 (I think I ate him and said ‘yum!’) but here are the 3 left for the photoshoot the following day.  In line with the humour of the whole situation I planted them and posted this photo on Instagram with a comment.

I know they look cute and fun but as soon as they’re soft and delicious they slide!!  So not exactly a success.  Who knew cake pops could be so tricky?  The sweet helpful community on Instagram have been supporting me through this traumatic experience and encouraged me to keep trying and practising.  Eek.

One helpful instagrammer sent me a link How To Make Cake Pops ….EASILY!!!  in case you’re interested.  I like the way the author starts with ‘I thought I HATED cake pops’.  Now she loves them, but me … we’ll see.  Any tips are welcomed, especially on how to bake them so they rise and fill the whole mould.  And on whether it’s possible to pipe mousse into the moulds.  But now for the next failure!

I’d always wanted to make a Fraisier, a classic French strawberry sponge cake filled with a fairly rich combination of crème pâtissière and butter cream. So of course I wanted to continue complicating my life by making a Healthier sugar-free Fraisier.

At least the genoise made with xylitol sugar substitute was a success.  Yay!

And the crème patissière bonded with the whipped cream in the most delicious way though I suspected they’d suffer from not having some butter or gelatine with them.  And I didn’t wait long enough for it to set.  Well, the Fraisier left the safety of the cake ring and acetate strip and managed to hold itself together for the photoshoot.  Though it felt a little worn and raggedy at the edges.

Then an hour later it began falling apart and needed serious help and counselling.  Meanwhile, I needed serious cake therapy so I ate some.  Delicious.  Yay!

A helpful suggestion from an Instagram friend was to turn it into a trifle.  Pretty good idea!  Plus I have one of those eat-from-a-jar things (yes, from that kitchen shop) which was just dying to be in a shot on my Barcelona balcony.

I did make a more stable refreshing dessert following The French Gardener’s recipe: spiced peach swirl frozen yoghurt pie, making the peach puréed as she suggested then adding gelatine.  It was yummy and I enjoyed playing with my cake ring and acetate strip then my first swirling experience.  Loved the peaches and spices:  ginger and cinammon, yum!  Oh, and balsamic vinegar!  🙂

Finally, I made my second superfood seed and nut bread – because one cannot live on cake alone.  This bread is totally not going to collapse.  Very stable and  absolutely delicious.  My mother made one and said she couldn’t stop eating it.  Here’s her photo, which I’ll put up in my Stuff you guys made gallery down in the footbar.  I know it’s my mum’s but I really like posting stuff someone else has made following one of my recipes.  Yay!  🙂

Lovely seed and nut bread by Claudette aka mum

So farewell sweet reader!  Perhaps you’ve enjoyed the glimpses at some not-so-perfect processes in my kitchen-which-looked-like-a-bomb-hit-it.  Hope you don’t mind me not posting a recipe until early next week.  I really enjoyed all the experimenting and excitement but I’m feeling a bit tired now.  Lol.  Think I’ll have a break with some sushi at the restaurant, walks, climbing, martial arts and getting out of the kitchen! 🙂

Hope you’ve enjoyed the food and found the little tales of baking mishaps entertaining or slightly useful.  After all, we can always learn from our, or in this case my mistakes.  Happy baking and eating!  And may the kitchen gods be with you! 🙂 x