Do you love fresh ginger and light refreshing desserts?  Can you get your hands on a can of sweetened red bean paste and some glutinous rice flour from the local Chinese store?  That’s all you need to make these amazingly delicious gluten-free red bean dumplings in just 20 minutes.  You can add black or white sesame seeds to the mochi-like dough for extra taste and texture.  I used to buy these typical Chinese dumplings frozen but homemade ones are so much better and not very sweet at all.  So fast, so easy, so yummy!  Plus the fresh ginger broth is delightfully refreshing and must be kind of heatlhy. 🙂

This is a typical and very common Chinese or Asian dessert.  I was fortunate to have my ex-flatmate from Shanghai and various Chinese friends making it during Chinese New Year and other festivals.  I also recently found some in Barcelona, in an authentic Chinese restaurant complete with basic wooden stools and very low prices.  Heavenly and delicious (the dumplings not the wooden stools).

They’re not quite the same with canned red bean paste but still not too sweet, tasty and very convenient.  If you’ve never tried them I recommend you do.  And if you’ve had Japanese mochi you’ll notice the dough is similar.  Personally I love these dumplings’ soft slightly springy dough texture and the taste of the red bean paste, perfectly set against the slightly sweet zingy ginger broth.  It must be because it’s gluten-free, what with the rice flour and all, but it feels really light on the stomach.  So let’s make this super fast and amazing dessert! 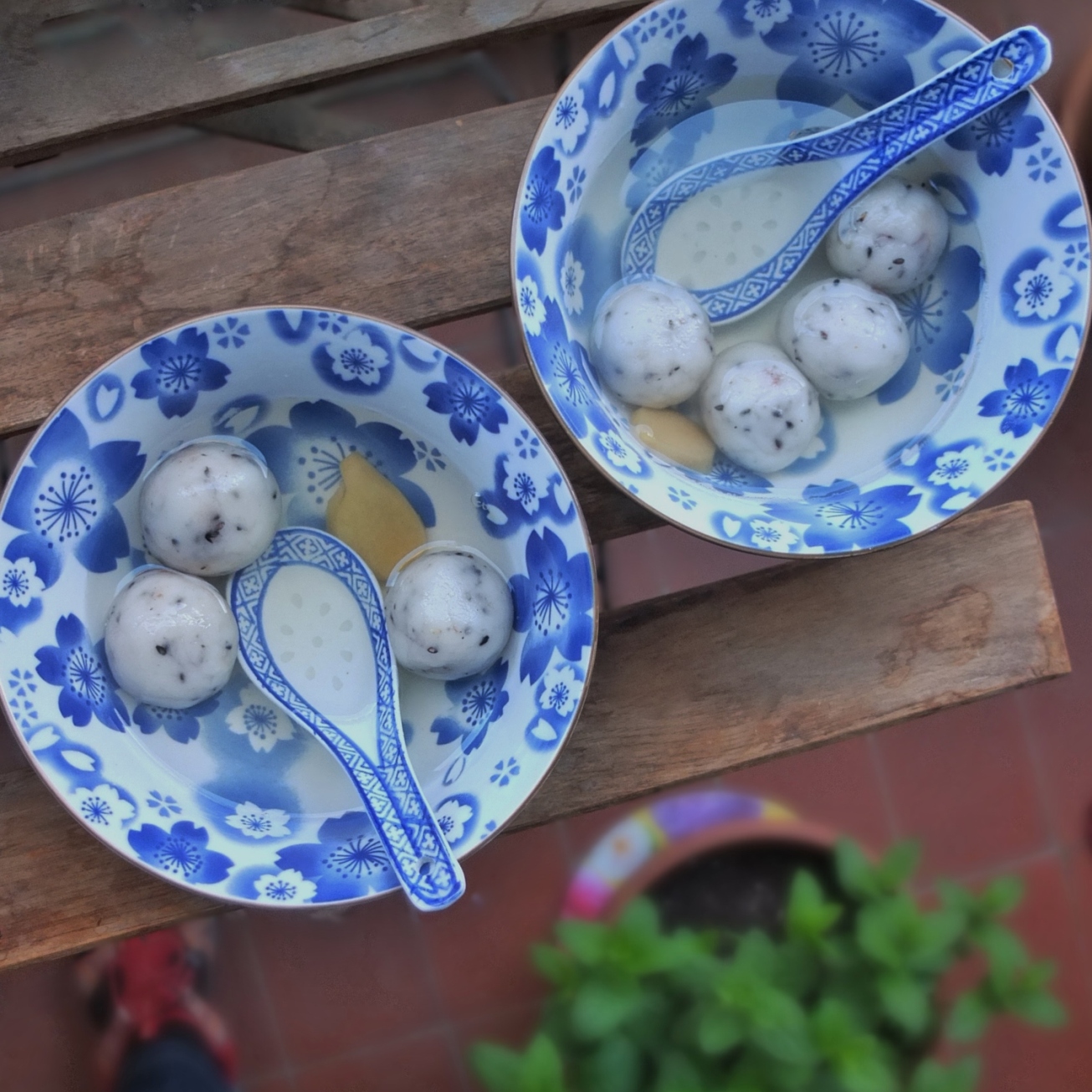 This is an adaptation of the lovely glutinous rice dessert dumplings in The Dumpling Sisters Cookbook.  For my dumplings I had to use a little more water for the dough but less water in the ginger syrup.  I also adapted the other quantities and tried white sesame seeds as well as black (the black seeds are attractive but the white ones are really tasty – both add a lovely subtle crunch).

As the Dumpling sisters say, you can play around with these dumplings and even use other fillings!  I tried a few balls with Nutella and organic peanut butter but they were more delicate and didn’t marry as well with the ginger broth (aka syrup).  The sweetened red bean paste I bought contains 60% red beans, sugar and water so it must be vegan (some brands contain animal fat apparently).  It doesn’t taste too sweet but if you prefer there are many recipes online for homemade red bean paste.

Ingredients (for 15 or 16 balls, 2 servings – halve the quantities for an individual bowl or freeze half for later)

Note:  Oops, I wrote ‘taste’ before I realised it would be on top of my cartoon nose!  Um… arty?!

Remember you can make a light ginger broth or simmer it longer to have it darker and stronger.

Don’t worry if your balls are a bit messy and have very small cracks – they clean up in the boiling water.  🙂

Wait 5-10 minutes before eating because the broth and balls will be very hot.  If you have too many put extra balls in the freezer on baking paper on a tray for an hour until frozen then transfer to a plastic bag or airtight tupperware container.   Boil from frozen (it probably takes a little longer – about 10-15 minutes).

And share …  I’m taking these to Free from Fridays hosted by Emma@Freefromfarmhouse.  Please do visit her for some great ‘free-from’ recipes.  And have some dumplings!  🙂

Hope you’ve enjoyed these red bean dumplings in ginger broth.  Wishing you a refreshing and zingy end of the week and weekend ahead.  With lots of happy baking, no-baking and eating of course. 🙂  Lili x