Babas have been around since the early 18th century – there’ll be a little potted history later – and recently in France they’ve been trending with exciting new flavours!  Rum babas were also one of my Dad’s favourite desserts so I’ll dedicate this recipe to him and imagine he would have been as excited by these as I am.  It’s a delicious dessert and not too sweet.  These beautifully moist and refined sugar-free Mojito rum babas are rings of yeasted savarin dough (similar to a brioche dough) soaked in mint-infused rum, lime and honey syrup then topped with a swirl of mint-infused whipped cream and a sprinkle of lime zest.  Babajiiiitos!  Son la bomba!  They’re the bomb.  🙂

I’ve found a rather nutty Mojito song by Spanish singer Gio:  ‘I’m drinking my mojito because it is so rico… ‘  Not my usual kind of music but he’s kind of funny and cheerful!  The last line is ‘I need a sofa’.  So let’s all salsa round the kitchen and shake our hips with a mojito in hand (just testing the ingredients) then start baking!

These babajitos were inspired by a recipe in the Fou de Pâtisserie magazine #7 and various other sources.  They’re simplified and I’ve played around with different ingredients, quantities and methods.  The whipped cream is sugar-free plus the syrup and savarin dough are both sweetened with honey.

Babajitos no. 2 timings (with your reserved batch of frozen savarin dough):  30 mins work plus 15-20 mins baking!

8 small baba or bundt moulds, or 1 big one.  A standmixer with a paddle attachment.  Disposable piping bags with a plain medium nozzle and one for cream swirls.

Whipped mint-infused cream – just enough to fill 8 small babas, but you can make extra to serve on the side.

Bring the cream and vanilla to the boil.  Stir in the mint and allow to infuse 4 to 24 hours, storing in the fridge to cool until required.

Follow the instructions on my savarin dough page.  Alternatively, use your own trusty recipe.  You need to make this kind of quantity (then only use half) because it’s tricky to make smaller batches.

You can prepare the syrup while your savarin dough is rising. 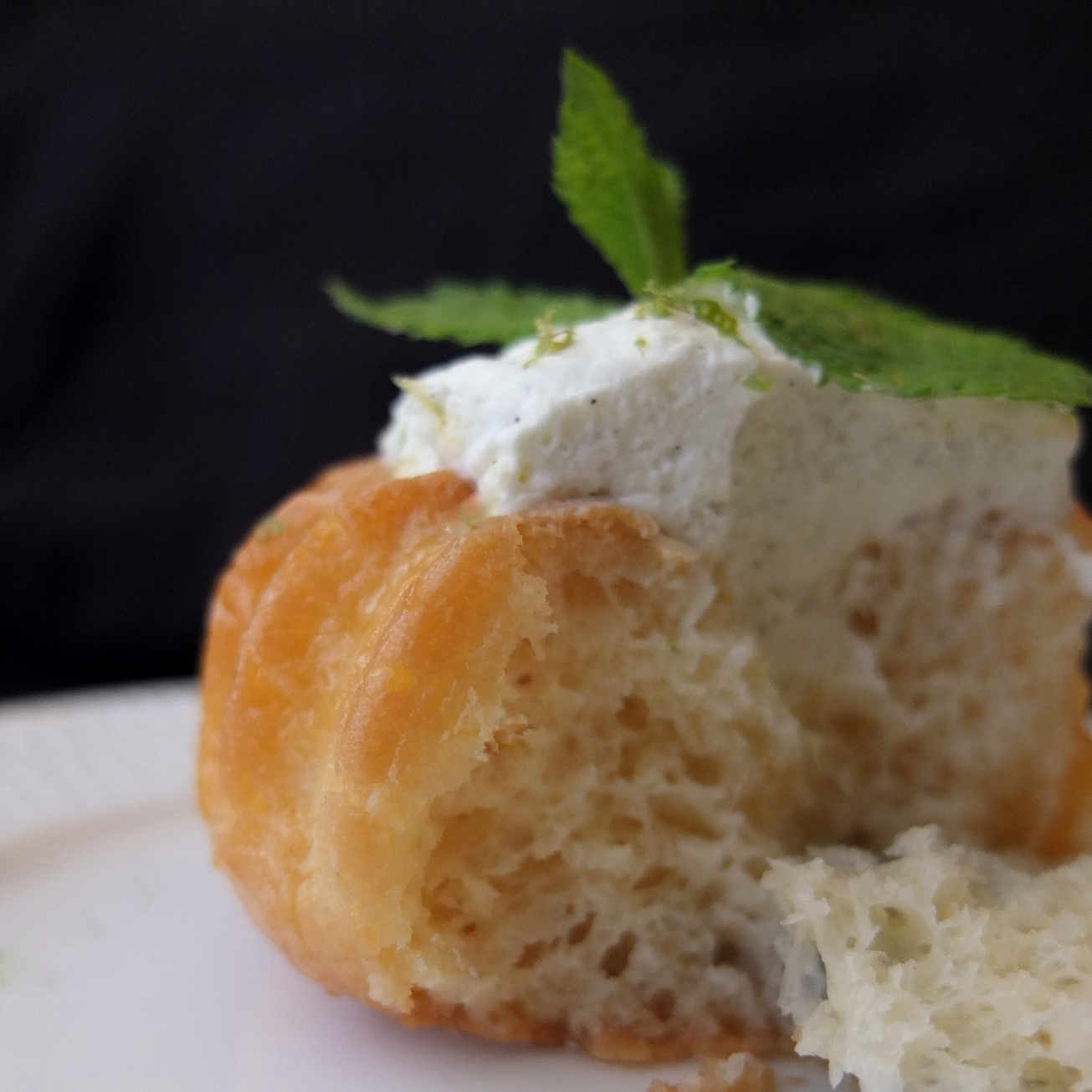 Variations (all topped with vanilla whipped cream) – Classic rum baba:  omit the lime and mint but add vanilla to the syrup.  Top with a glacé cherry.  You can serve with chopped fruit such as pineapple soaked in remaining rum syrup.  Kirsch savarins:  imbibed with kirsch cherry liqueur syrup (with orange and lemon zest) and filled with cherry compote.

These babas keep really well up to 3 or 4 days in the fridge in airtight tupperware.  I think the alcohol helps.  You can also store the whipped cream separately and add with the lime zest and mint leaves just before serving. 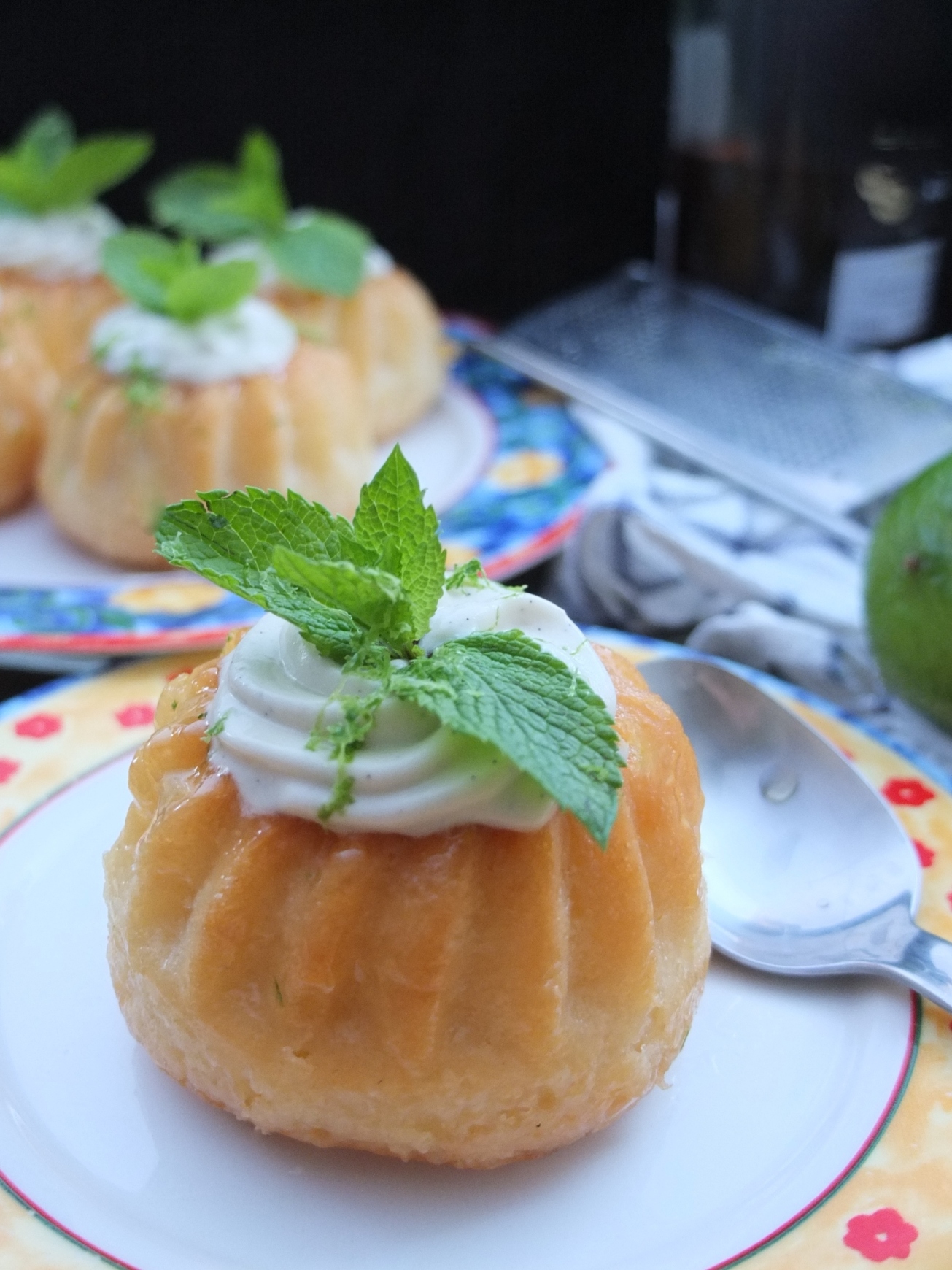 According to legend, in the early 18th century the exiled king of Poland, Stanislas Leszczynska, found kugelhopfs too dry and started dipping the bread in Tokay wine to moisten it.  Some even say he was so chuffed with this invention he named it after Ali Baba, a hero from his favourite book A Thousand and One Nights.  The dessert underwent some changes, with Parisian pâtissier Stohrer replacing the wine with rum in 1835 and with the use of a brioche dough.  This Baba au Rhum became very popular in France and is often served at special occasions.

So I hope you’ll enjoy this modern cocktail version:  Mojito babas or babajitos.  It’s the kind of eye-popping celebratory dessert that says ‘let’s party’ and it’s so light and moist you might easily down two or more in one sitting.  Olé!

Farewell for now sweet cocktail-eating reader!  May you party along in your own merry way and enjoy a sweet buzz of a week.  Happy baking and eating!  🙂 x

P.S.  There’ll be Gracia festival photos as promised in my next post .. 🙂