Originally this amazing dessert was destined to be some cake’s sidekick and without its own post.  But upon tasting the first spiced aromatic spoonful I swooned and changed my mind.  Yup, it deserves its own space both here and on your plate!  Though it does team up delightfully with Japanese cheesecake or vanilla ice-cream.  Unwrap these just out of the oven and your senses are filled as the steam and aromas float out and you see the wonderful colours of peaches, plums and raspberries in a sauce of blueberry and maple syrup.  You’ll smell the vanilla, star anise, cinammon, orange peel and perhaps even a little ginger, then together with the deliciously baked fruit they’ll wow your taste buds.  I love my Spiced fruit en papillote.  Seriously, if I could find my muse I’d pen an ode to this dessert.  🙂

I’d never thought of baking fruit en papillote till I recently saw them in my mum’s cookbook Gut Gastronomy by Vicki Edgson.  I adapted her recipe using my usual ‘Christmas cracker’ parcels rather than the triangles in the book, which I couldn’t figure out!  Doh.  And Vicki Edgson uses pineapples then blackcurrants and honey for the sauce, while I used maple syrup and my favourite seasonal fruit.  I added optional ginger in some packages, which results in a balanced and less sweet overall flavour.  But without ginger the full impact of vanilla hits you.  Love both versions, not sure which I prefer so if you try this recipe let me know what you think and what you serve with it! 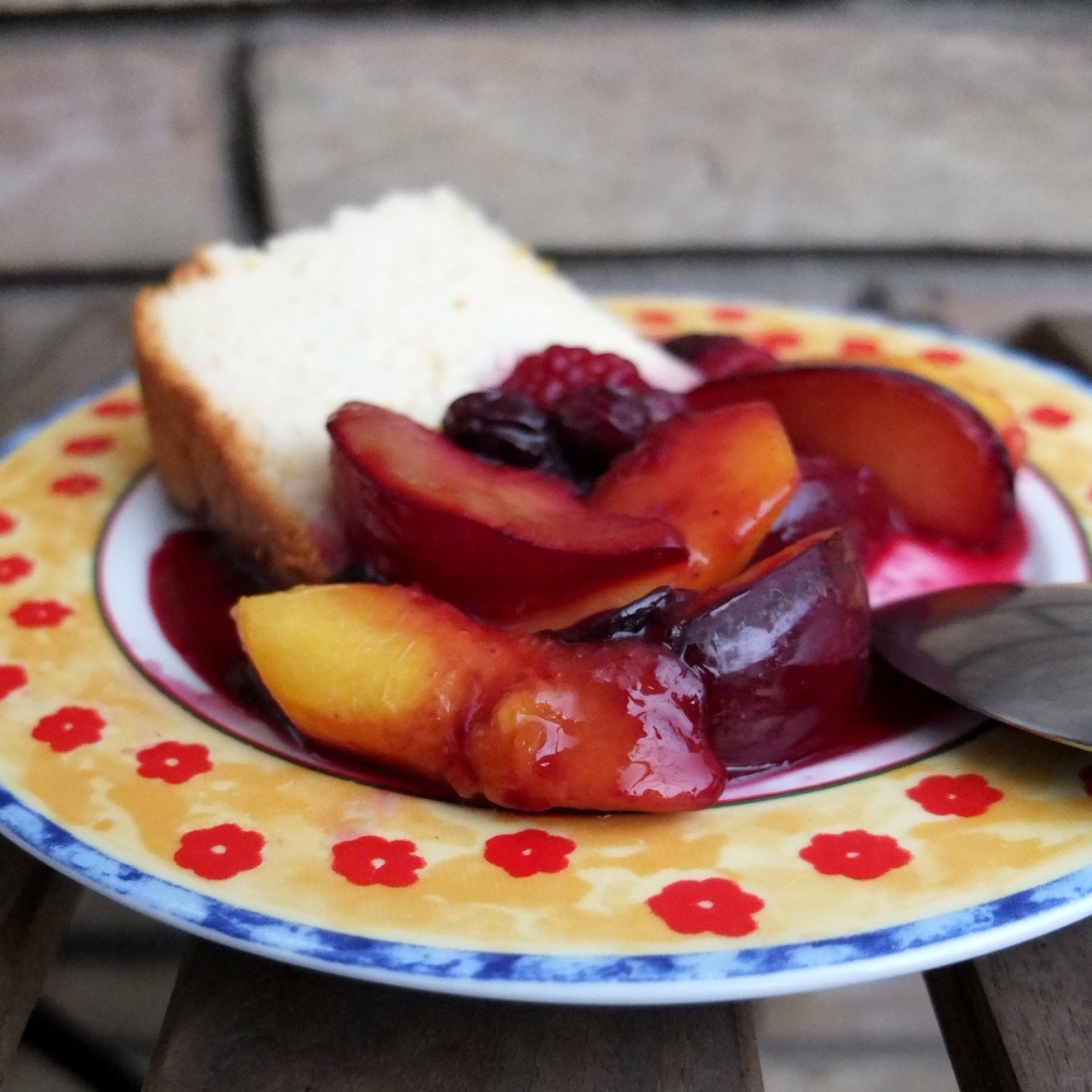 Simmer the blueberries and maple syrup 5 minutes in a small heavy-based saucepan till the berries soften.

Put around a tablespoon and a half of blueberry sauce in the centre of each of the 4 squares of baking paper.   Share out the fruit, placing on top of the sauce then finally the orange peel.

Divide your spices into 4 and place on top of the fruit.

Bring up two sides of the baking paper to make an upright double rectangle and fold over three times to seal.  Twist each side like a sweetie to seal completely.  Leave space in the bag for steam.  Place on a baking tray.

Bake around 10 minutes.  You can serve in the bags, opening them up to eat at the table.  Remove the spices and peel before tucking in. 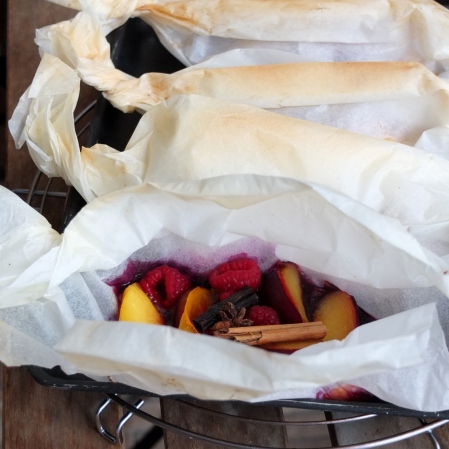 I’m sharing this simple dessert with Recipe of the Week@aMummyToo, Tasty Tuesdays@HonestMum and Free from Fridays@Freefromfarmhouse.

Please have some served with a simple dessert like pannacotta, vanilla ice-cream or plain cheesecake like a soft cotton Japanese cheesecake.

Or have your nice little package of spiced fruit en papillote alone as a simple delicious treat.  It even tastes great cold!

Well, that’s all folks!  Hope you enjoyed that short, sweet and healthy treat dear reader.  And easy.  So easy.  Feels a bit strange saying goodbye so soon.  Have a simply lovely week and happy baking or eating! 🙂 x