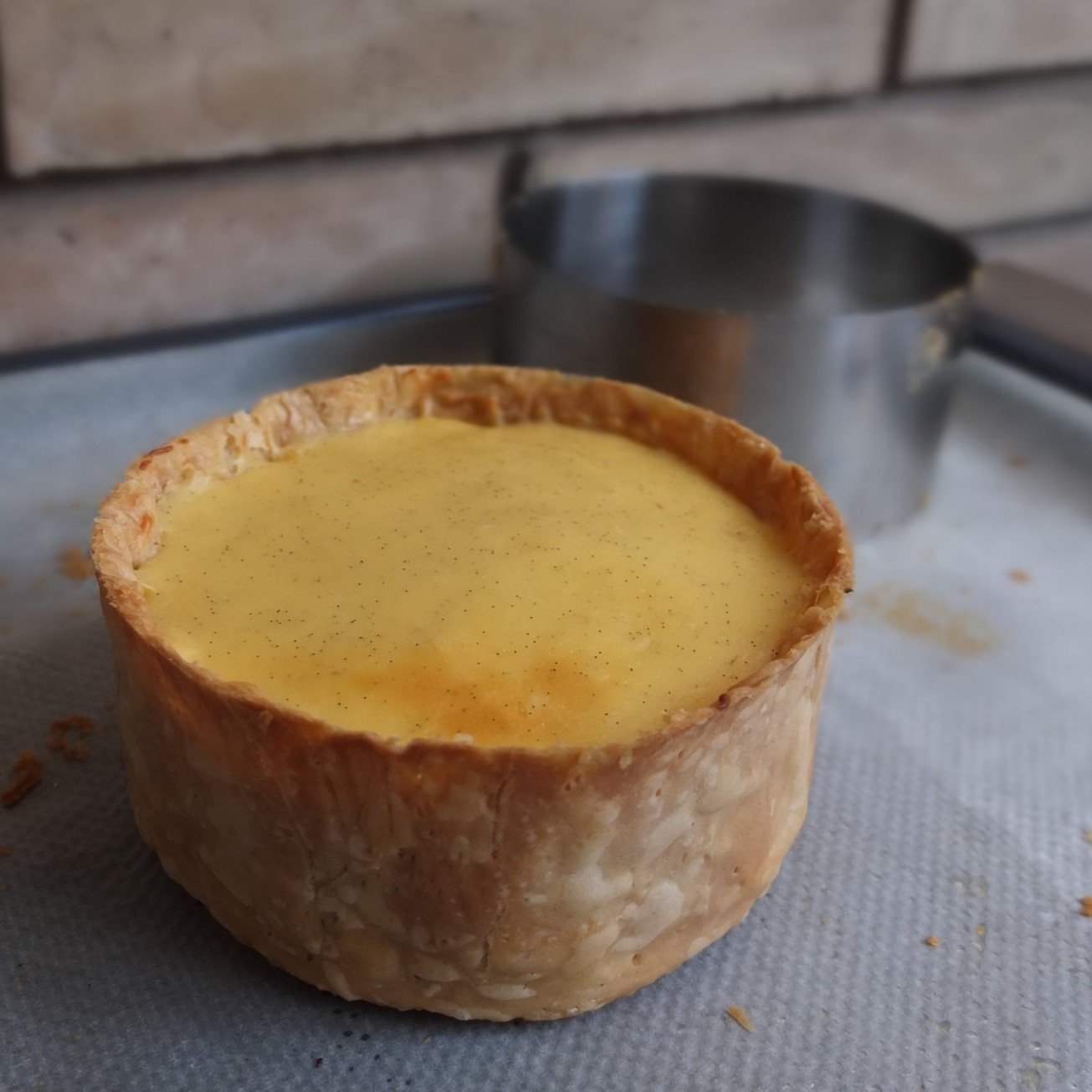 Baking a flan parisien has been a dream for many years but with so many recipes the choice was overwhelming and I made none at all!  I also feared my flan would be of the scarily bright yellow rubbery kind but when we tasted Mori Yoshida’s in Paris I knew I’d found the perfect model.  It’s lighter, softer and less eggy as there aren’t many egg yolks in there.  You pre-bake the pastry case so the custard filling is in the oven a short time and stays a lovely creamy texture you can still easily slice into.  Mum was staying with me during the ‘flan prototype tests’ and enjoyed them so much she bought a cake ring to make one herself.  She’s back in London now and might be kind of waiting for me to post this recipe so I’ll … um get on with it! 🙂  I used my homemade spelt puff pastry but you can use any good-quality butter puff, rough puff or shortcrust pastry.  The ingredients and method for the filling are simple:  eggs, milk, cream, a little sugar and cornflour, with a vanilla pod for flavouring.  It’s all you need for a simply delicious French-style custard tart, a creamy flan parisien.  Tempted…? 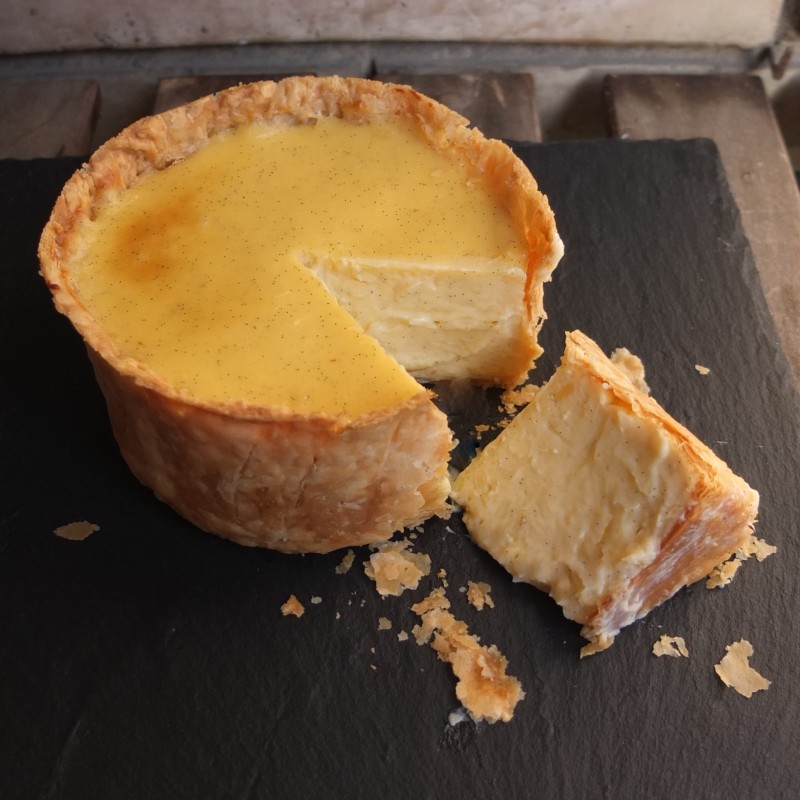 If you’re in Paris you can visit Mori Yoshida and test this flan yourself!  Here’s a map to help you find his lovely pâtisserie. 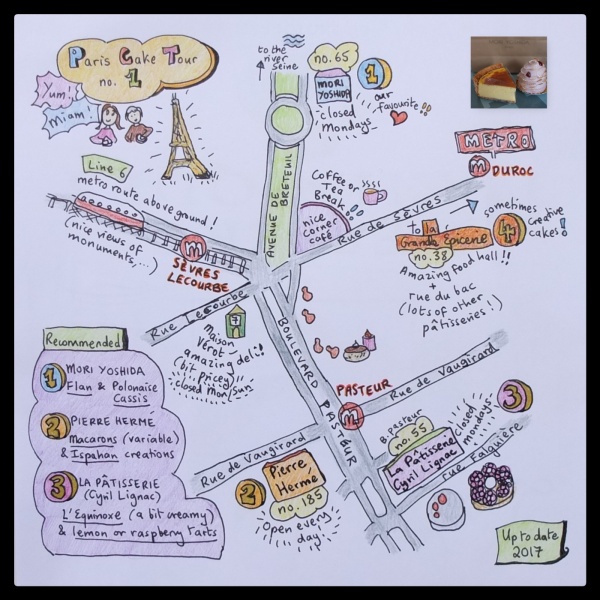 Here’s a close-up of his flan. 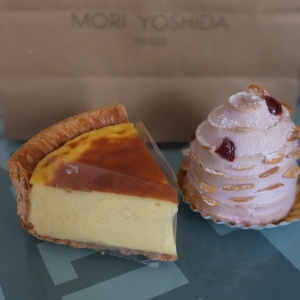 And now for how to make it!  It won’t be as dark on top but with just the same amazing flavour and texture.

The flan filling is based on Mori Yoshida’s recipe found in the French Fou de Pâtisserie magazine (issue 5, May/June 2014).  I used cornflour instead of ‘powdered custard powder’ (crème en poudre) and homemade spelt puff pastry instead of shortcrust.  You can use any kind of shortcrust or puff pastry.  There’s another version of Yoshida’s flan online where the raw pastry case and filling bake together 40 minutes – it’s an option but you’d probably lose some creaminess.  You could also replace the cream with milk or even try semi-skimmed or non-dairy milks but again it will be less creamy.  My advice would be go full-fat and have a small slice – it’s worth it!  🙂

I use a small high cake ring to imitate Mr Yoshida’s tall flan but the size is flexible.  You can use different ring or tin sizes for the quantities in my recipe, calculated with the equation:

V = πr² x h (Volume = 3.142 x radius squared x height) where radius is half your ring/tin diametre and the volume obtained with the quantities below is approximately 679.

The calculations are approximate but you can’t  go wrong – too much filling means you’ll have some left to lick.  Too little and the flan tastes delicious but won’t be so photogenic, like my first prototype (oops, very thin pastry too)…

With leftover puff pastry you can make tasty savoury pastries!  No-waste delicious snacks!  Roll out a rectangle 2mm thick and cover with thin slices of cured ham and cheese (or any filling like mincemeat and marmalade).  Roll up then cut 3-4mm slices and place on the baking tray around your tart. 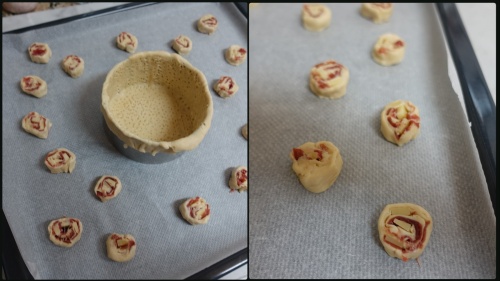 Rest in the fridge 1 hour before baking. 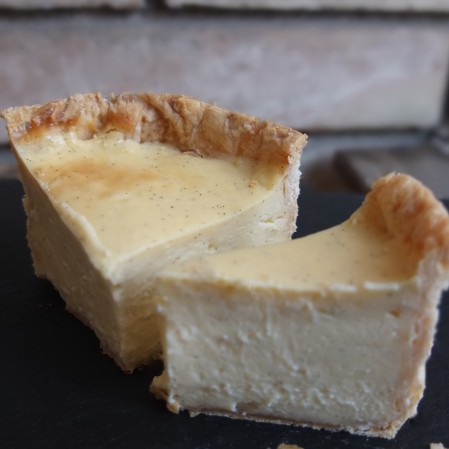 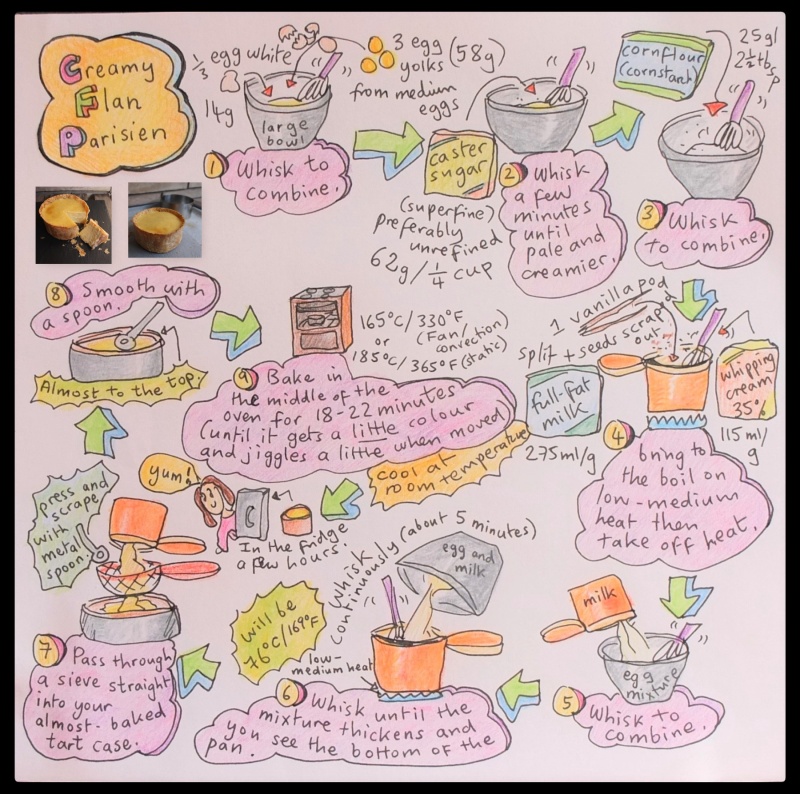 Note:  don’t simmer it too long in step 6 – it could take less than 5 minutes.  It should thicken but not too much and still be quite fluid if you want a nice creamy flan.

You can eat this tart after 2 hours at room temperature – it will be very creamy. 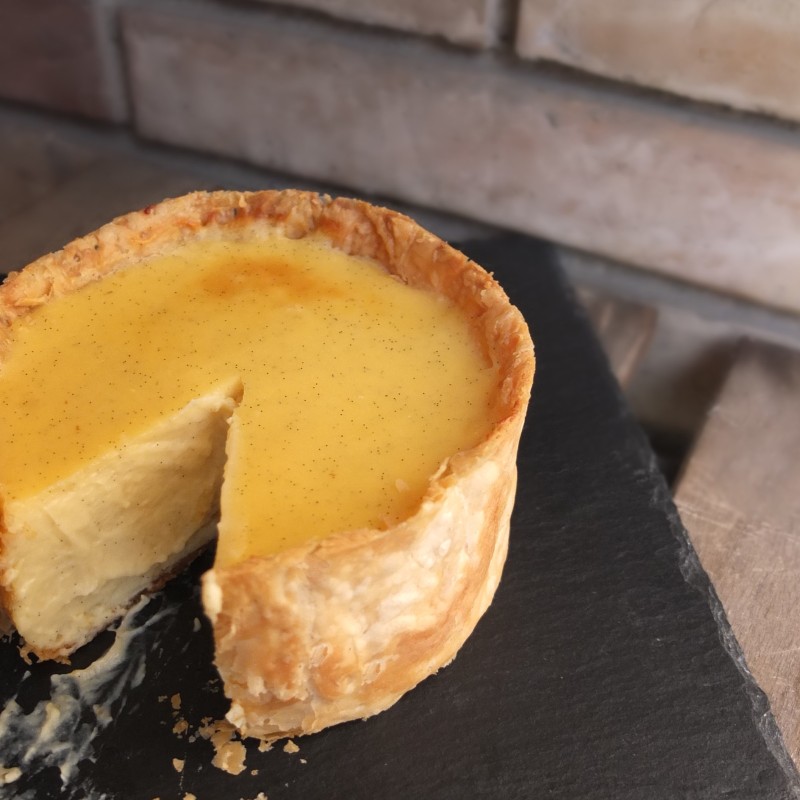 It’s even better eaten after 4 hours in the fridge and within 20 hours.  After that the pastry gets a bit soft but it’s still delicious. 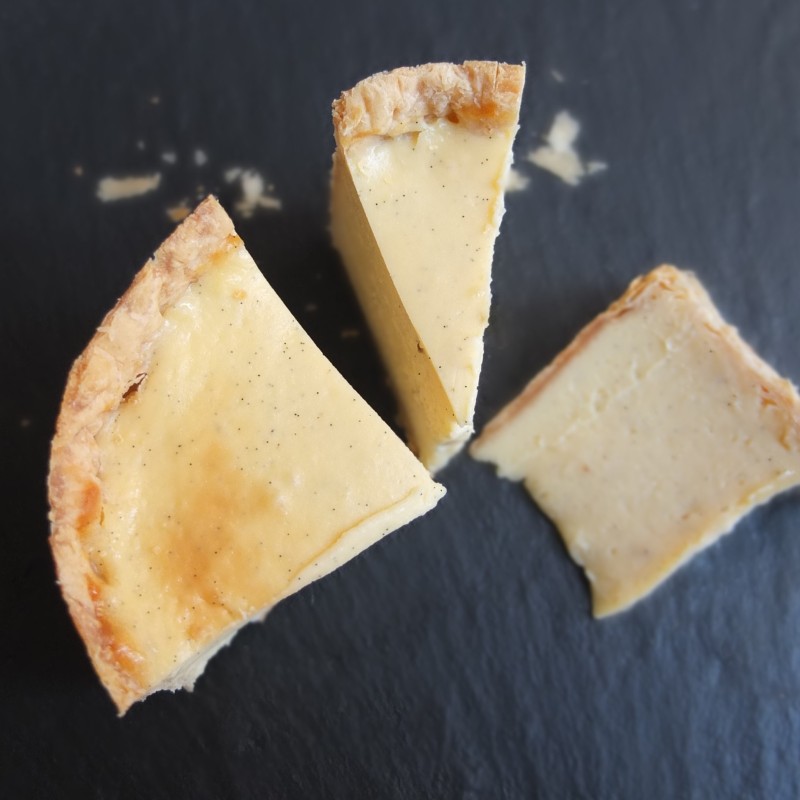 So hope you enjoyed the creamy flan parisien or pâtissier, a typical French dessert dating from the middle ages and originating from the English custard tart!  The worldwide versions are all delicious and it would be great to bake the Portuguese pasteis de nata or Chinese steamed custard tarts too.  Hmmm.  Just one more photo… 🙂 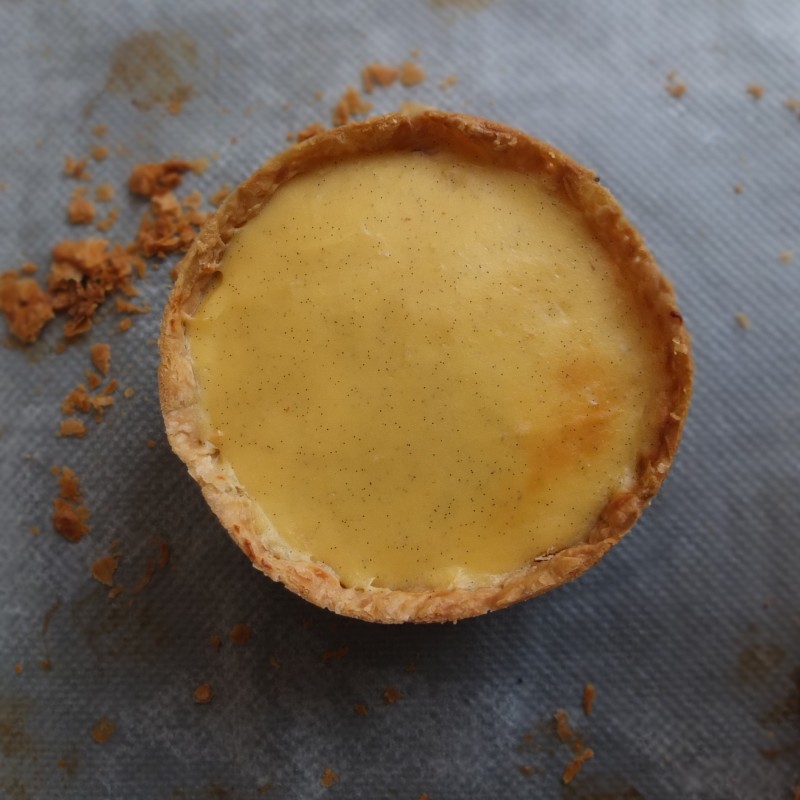 Leaving you with visions of custard tarts I bid you farewell dear readers!  Hope you’re having a lovely week with some happy baking and eating! 🙂 Lili x