Wait, don’t leave!  The homemade pastry is fun and not difficult, honest!  Making strudel with the traditional pastry hand-stretched and spread thinly over a cloth has been a dream of mine for years and there was no need to be scared because it’s easy and fast to make both the the filling and the pastry – just knead flour, oil and water 5 minutes.  Hurray!  Thank you Abril and Aisha from the Cooking the Chef group for providing that extra push to make strudel – this month they’ve challenged us follow a recipe from German chef Alfons Schuhbeck (more info about him and this dessert further down).  The strudel recipe in his Bavarian Cookbook is clear and easy to adapt.  You can use filo pastry but the real adventure is making it yourself like a German or Austrian grandma!  The result is thin, flaky but crisp layers of pastry wrapped around loads of chopped apple with bread, brioche or cake crumbs, sultanas soaked in rum and optional chopped nuts like pecans or walnuts.  After tweaking five prototypes I found my perfect flavour balance with a little cinnamon, cardamom and lemon juice!  The smaller 3-4 person apple strudel is easier to handle on just a tea towel rather than the bedsheet idea someone once scared me with!  And you can make the traditional pastry or lower-gluten one with three-fifth gluten-free flour mix plus wholegrain teff flour and just two-fifth ’00’ flour.  There’s also a link to a glutenfree pastry if you prefer.  And it’s a vegan dessert if you use bread.  Adapt to make your own favourite apple strudel with homemade pastry!  You’ll never look back… ! 🙂  Here’s the latest traditional pastry strudel:

I confess it might be my favourite.  I love stretching the pastry!  And the flaky layers are lovely to eat.

Here’s a bigger traditional pastry one with tart dried cranberries instead of raisins.

And here’s one with a tasty slightly sweet lower-gluten pastry.

Which one would you make or eat? 🙂

I used Schubeck’s recipe as a starting point then adapted, making the first strudel full size then the following ones half-size, which is easier to roll.  There’s a debate about including egg in the pastry.   Many recipes don’t so I eliminated it and avoided using just half an egg yolk.  Coincidentally the pastry became vegan!  Cool.

Soak sultanas in rum; make pastry (5 mins to make then rest 1 hour); while pastry’s resting prepare filling ingredients (15-25 minutes depending on how fast you chop apples) and melt butter so it cools before assembling; assemble/roll (10 minutes); bake (35-45 minutes).  From start to finish it’s about 1 hour 40 minutes with just 25-35 minutes’ work.

Pastry –  the quantities below make the larger strudel that fits diagonally or curved on a large 40cm x 30cm baking tray.  To make a smaller 3-5 person strudel split the pastry in two and freeze half for another day.

Lower-gluten pastry (tasty but a bit less elastic, thicker and stiffer – so there’s a greater quantity of pastry to cover the same filling)

Follow the instructions above for the traditional pastry but whisk the flours, salt and xantham gum together.  And in a separate small bowl whisk the water, vinegar and oil together.

For a gluten-free version check out the Gluten-free Cottage’s strudel recipe which inspired me to use teff flour and apple vinegar.

Filling and baking your strudel

Have all your ingredients ready for when you roll out and stretch your pastry, including the melted butter.  Lay out a smooth clean tea towel on a flat surface. The side of your worktop will look something like this: 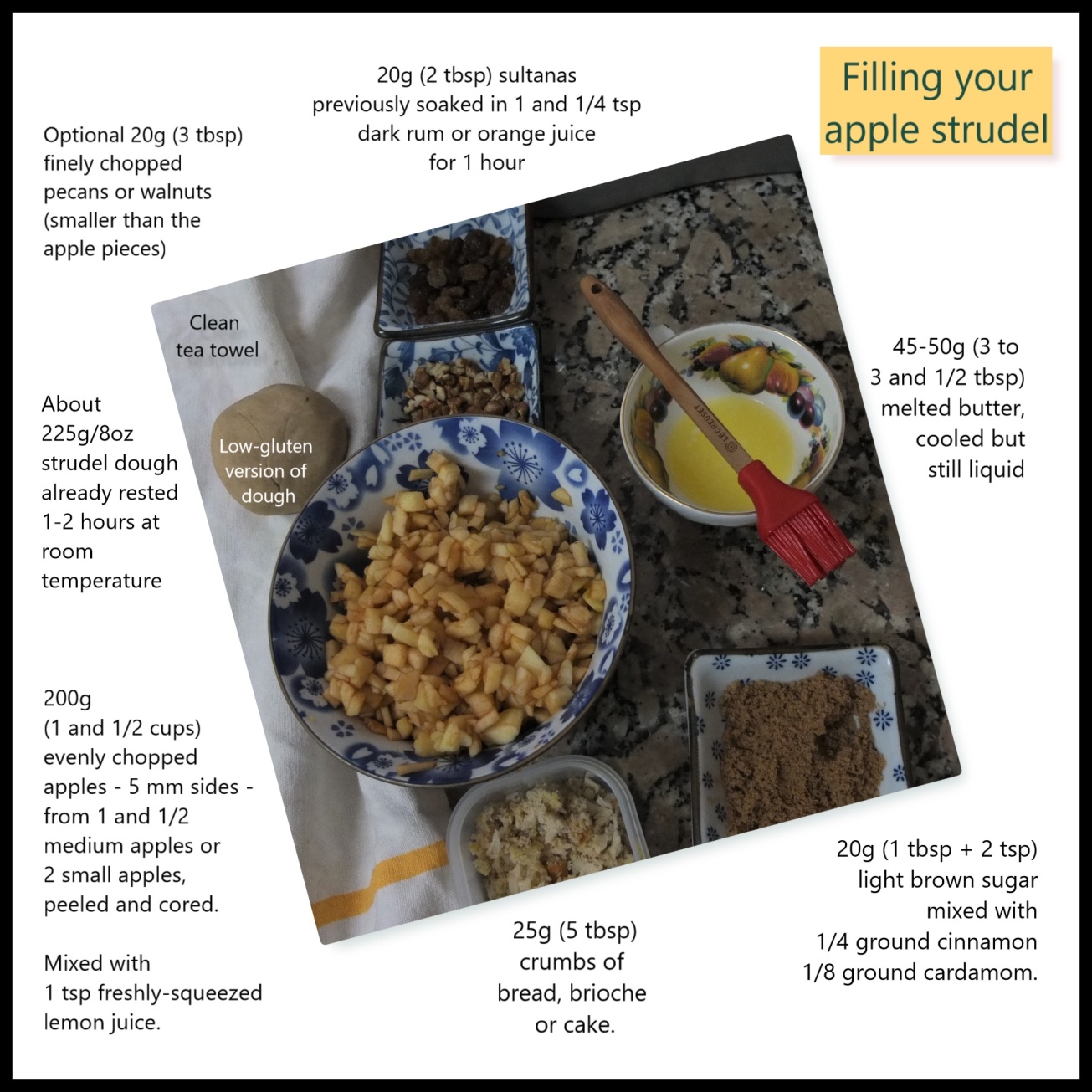 I don’t pre-mix all the ingredients because the sugar starts making the apples watery.  And sprinkling separately helps distribute the sultanas and nuts more evenly.  If you choose to pre-mix the ingredients then do it just before rolling the strudel but keep the bread or cake crumbs separate – apparently they form a barrier between the apples and pastry, soaking up liquid.

Before starting you could watch a funny little youtube video:  Strudel – watch a pro stretch dough. It shows the technique for hand stretching dough with some great tips, though you need practice to get as good as that little lady.  Amazing.  Anyway we’ll be fine starting with this smaller rectangle.  By strudel prototype number 5 it was getting easier and neater but even number 1 held together.  Sadly the first lower-gluten one semi-collapsed on the way to the baking tray and was patched up with extra traditional pastry!  Poor thing… but could still eat it!  Be careful but it’s all good and edible. 🙂  With the now improved lower-gluten pastry you can safely follow the steps below but your rectangle will be a bit smaller and thicker (have less rolls to avoid undercooked pastry layers).

Lightly flour the smooth tea towel laid out on your worktop.  First roll out a smaller rectangle to quite thin then use your hands to delicately stretch from the middle outwards to make a bigger rectangle that’s very evenly thin.  The test is you should be able to read a newspaper through it! (this probably won’t happen with the lower-gluten pastry but you can get it reasonably thin).  These were my rectangle sizes with the traditional pastry:

Immediately brush all over with melted butter.  Sprinkle the bread or cake crumbs over 2/3 of the pastry (as shown in the illustration), then make a mound with half of your chopped apples.

This is a delicate operation but it does get easier with practice!

Roll it so the seam is under the strudel.  Brush with more melted butter and bake 15 minutes.  Then lower the oven temperature to 160°C/320°F (fan-assisted/convection) or 180°C/350°F (static, non-convection oven) and bake a further 15 minutes.  If it’s still a bit pale (you can brush again with more butter here if you like) bake a further 5 to 10 minutes until the strudel’s light golden brown. 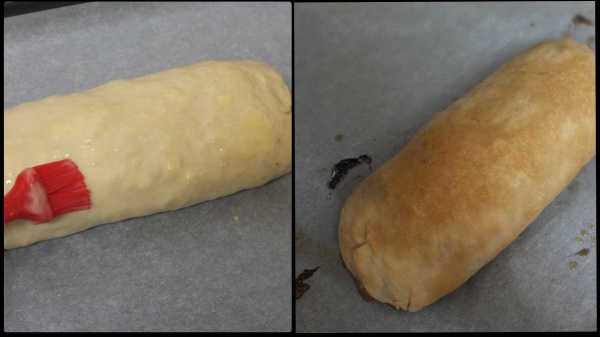 Cool on a wire rack.

Allow your strudel to cool down to warm before sprinkling with icing/powdered sugar.

You can serve with cream or ice-cream.  Best eaten on the day at room temperature when the pastry’s crisp and flaky. 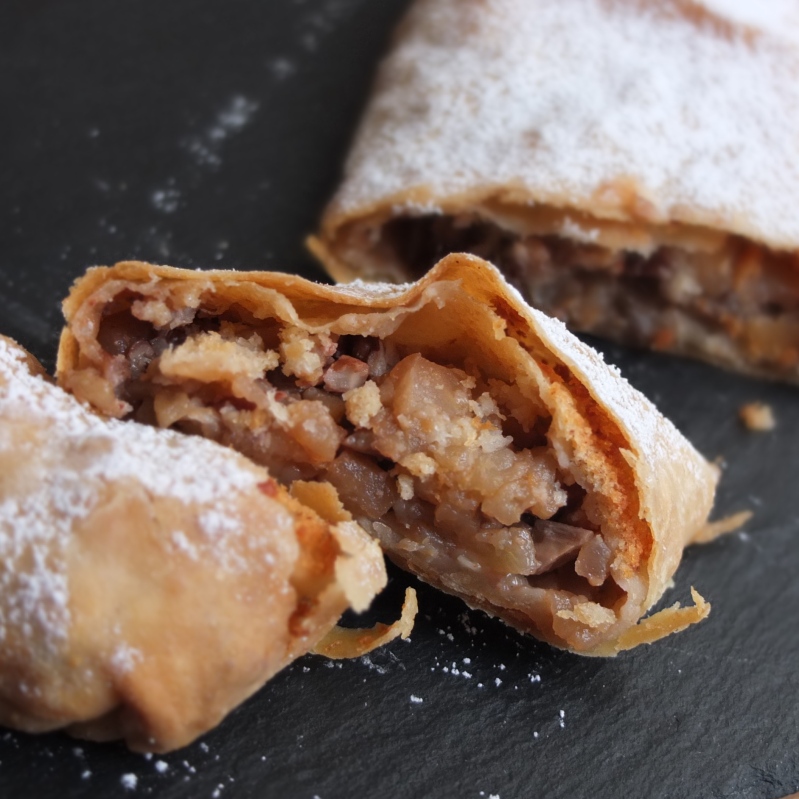 After that store in airtight tupperware in the fridge.  It’s also yummy on day 2 or 3 with softer pastry and more developed flavours.

Thank you Mr Schuhbeck for the painless yummy experience!

Alfons Schuhbeck is one of Germany’s top chefs.  He’s also a celebrity, author and businessman with his own restaurant!  He was a telecommunications technician when he met Sebastian Schuhbeck, a restaurateur.  No the name’s not a coincidence!  After Sebastian set him on his career in hospitality and became his mentor he adopted him!  Wow!  If you’re interested, Alfons Schuhbeck’s restaurant Südtiroler Stuben (2 michelin stars!), wine bistro, catering service, cookery school, spice shop and ice-cream parlour are based in Munich.

Surprisingly the strudel didn’t originate in Germany but in Austria where it’s considered a national dish!  And according to the Wikipedia article on Apple Strudels the oldest known recipe dates from 1697.  Strudel is a German word meaning ‘whirlpool’ and you can imagine the pastry wrapping itself like an edible whirlpool around and around a sweet or savoury filling.

So thanks again Aisha and Abril for organising the Cooking the Chef challenges.  It’s interesting discovering chefs from different countries and checking out their recipes!  You can see the Schuhbeck challenge recipes here (in Spanish). And do please have a slice of homemade apple strudel.  Maybe a lower-gluten version?

Or perhaps the same delicious filling wrapped in traditional pastry?  Not the most beautiful dessert ever but apple strudels are truly scrumptious! Tempted?

Bye again and thanks for visiting dear reader!  Wishing you a lovely weekend with a happy whirlwind of yummy baking and eating activities! 🙂 Lili x