Last week on the phone mum said she’d like a rum baba for her birthday cake next month.  I guess they’ll always be considered as treats for special occasions by the French, including mum.  At the time I happened to be experimenting with a kirsch savarin using leftover dough from my mojito rum babas.  Savarins are brioche-like yeasted cakes traditionally baked in ring moulds then soaked in alcohol.  Mum definitely sounded interested and said she had the kirsch, a beautiful cherry liqueur sweeter and mellower than rum.  So this might be a practice birthday cake!  It’s a deliciously moist and ‘delicately’ alcoholic Pink grapefruit and kirsch savarin soaked in a syrup beautifully balanced between the grapefruit, kirsch and refined sugar-free sweetener maple syrup.  It’s filled with lashings of cream whipped with vanilla and kirsch then topped with a rose of grapefruit segments.  Decorated with optional glacé cherries and angelica if you like the full 70s effect!  Where’s the disco?  Or more importantly, where’s my lovely dessert?  Another one I’ve fallen in love with! 🙂

This recipe was invented based on the idea of a balanced syrup that is neither too sharp nor too sweet, with enough to completely soak and moisten the savarin.  Then there’s loads of cream with a more subtle flavour and sweetness.   The vanilla and maple syrup are hovering in the background supporting the main stars:  pink grapefruit and kirsch, who are not fighting each other but being friends and holding hands. 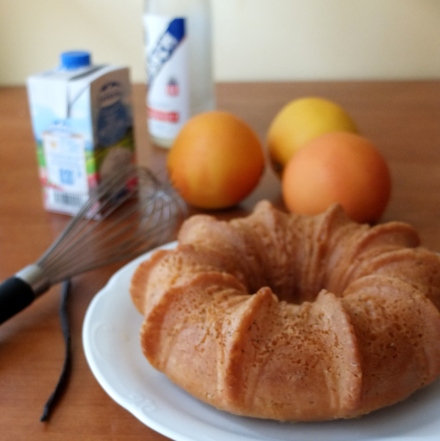 Over 2 days:  You can bake the savarin(s) and soak in syrup the previous day, as I did this time.  Refrigerate in an airtight container then the following day whip the cream and assemble.

Please follow the recipe on my Savarins page.  You use half the dough and freeze the other half.  My halves weighed between 210g to 230g/8oz each.  You can make a big savarin or 8 small ones.

Notes:  for a stronger vanilla flavour bring the cream to a simmer with the vanilla then infuse for an hour or so and chill the cream well before using.  The mascarpone helps stabiliise the cream so it doesn’t flop.  It’s optional and with thick double cream it’s less necessary.

Assembly (note to self:  remember to brush with apricot jam before decorating!)

Brush your savarin with the apricot jam to cover completely so it glistens.  Spoon some cream in the middle hole then use a disposable piping and nozzle to pipe rosettes or swirls on top.

Make a rose with the grapefruit segments on top of the cream – mine’s a bit messy!  You can also sprinkle little bits of grapefruit over the cream.  Then finally, if using place the glacé cherries and angelica triangles artistically on your savarin.  Add a vanilla pod for a French new pâtisserie style.  Tada!

This cake keeps really well in an airtight container and in the fridge up to 4 days.  It might be even better on Day 2.  Actually anytime is perfect!  🙂

So I think I’ll take my cake along to Recipe of the Week hosted by Emily@aMummyToo and Bake of the Week hosted by Helen@Casacostello.  Also to Fabulous Foodie Fridays hosted by Lucy@BakePlaySmile and Lauren@CreateBakeMake and of course to And also to the September Perfecting Patisserie challenge hosted by Lucy@BakingQueen74.  Please help yourselves to a slice of cream with some heavenly Pink grapefruit and kirsch savarin cake.  🙂 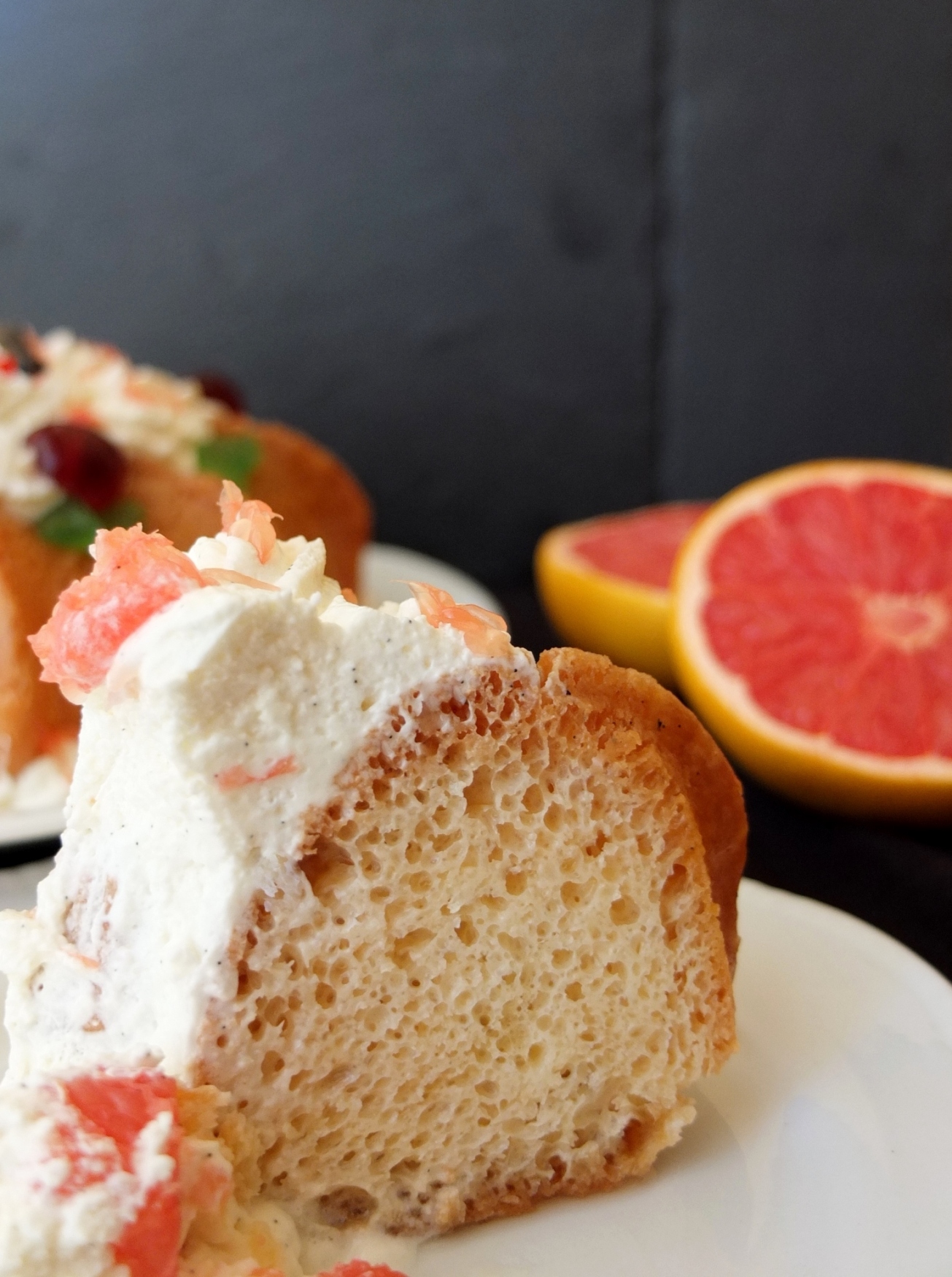 Have a slice of pink grapefruit and kirsch savarin!

Farewell and till next time sweet reader!  May you have a bright and colourful week with some happy baking and eating! 🙂 x

P.S.  (A month later)  Here’s mum’s birthday cake!  🙂  Instructions, How to make cake bunting, are in my cake decorating section.