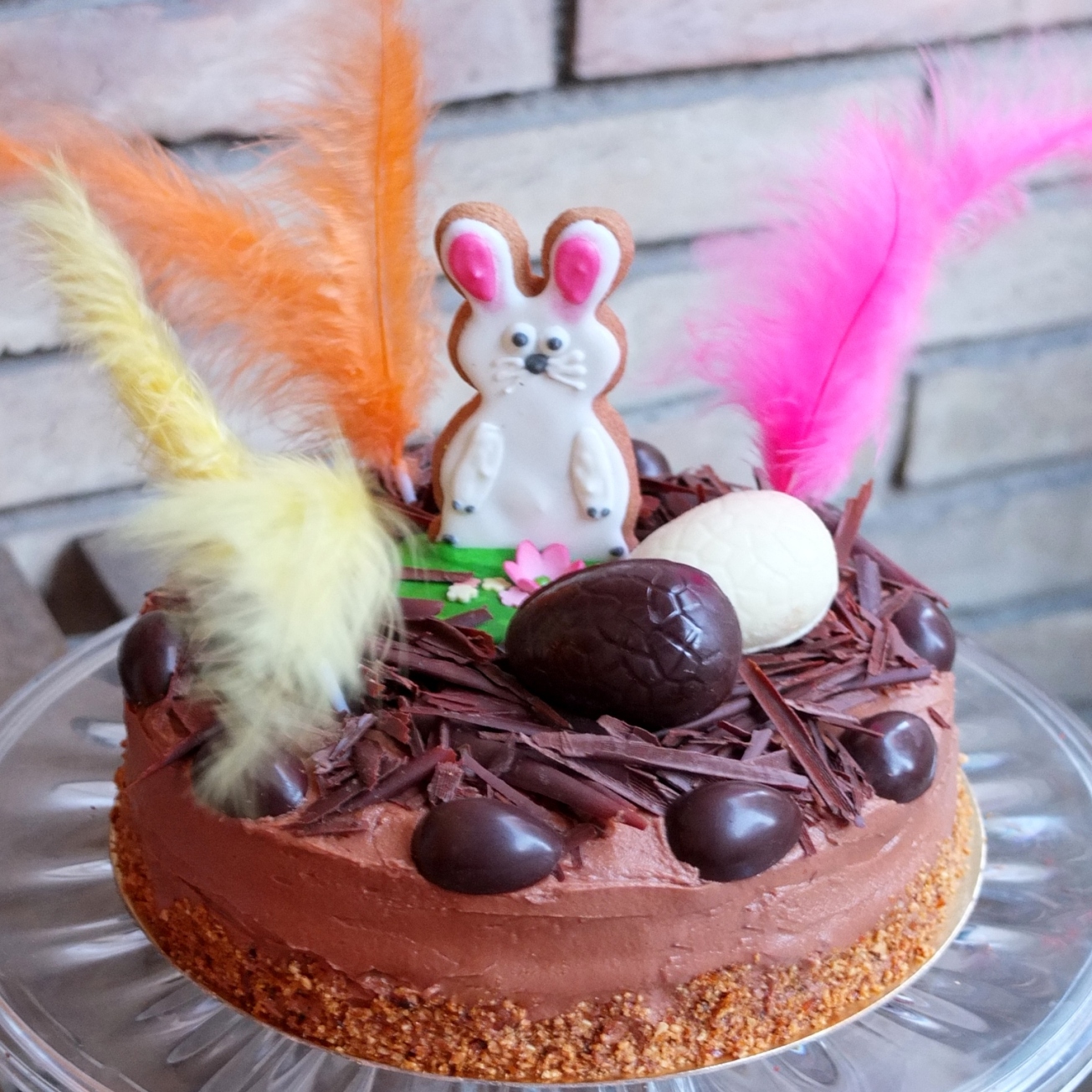 A friend requested a cake to give his goddaughter and niece, a Catalan tradition during Easter.  More about that and some photos later.  Several elements would ensure this cake could impersonate a local mona de pascua de chocolate (chocolate Easter cake) and not be spotted as an impostor:  there should be chocolate eggs and coloured feathers on top, maybe some chopped almond or praliné on the side and a cute central cartoon-like figure. Yes, this cake was a first for me in many ways.  I mean have you used coloured feathers on your cakes? 🙂  It was also my first time really decorating an Easter chocolate children’s cake!  It was very strange keeping flavours simple but in-depth research (asking lots of kids over the years and giving them cake) shows they often want plainer flavours like chocolate and vanilla!  I’m sure you know this already – I’m just very slow on the uptake. 🙂  And fast simple frosting is very popular, like this one combining softened butter, icing sugar, melted dark chocolate and vanilla essence.  Here it fills and envelops a moist chocolate and vanilla sponge made with my trusty red velvet cake recipe but kicking out the slightly weird cinnamom (sorry cinnamom, I do love you).  And I can see where children and many adults are coming from.  Sometimes it’s great to have a slice of something sweet, simple and gooey!  Drool. 🙂 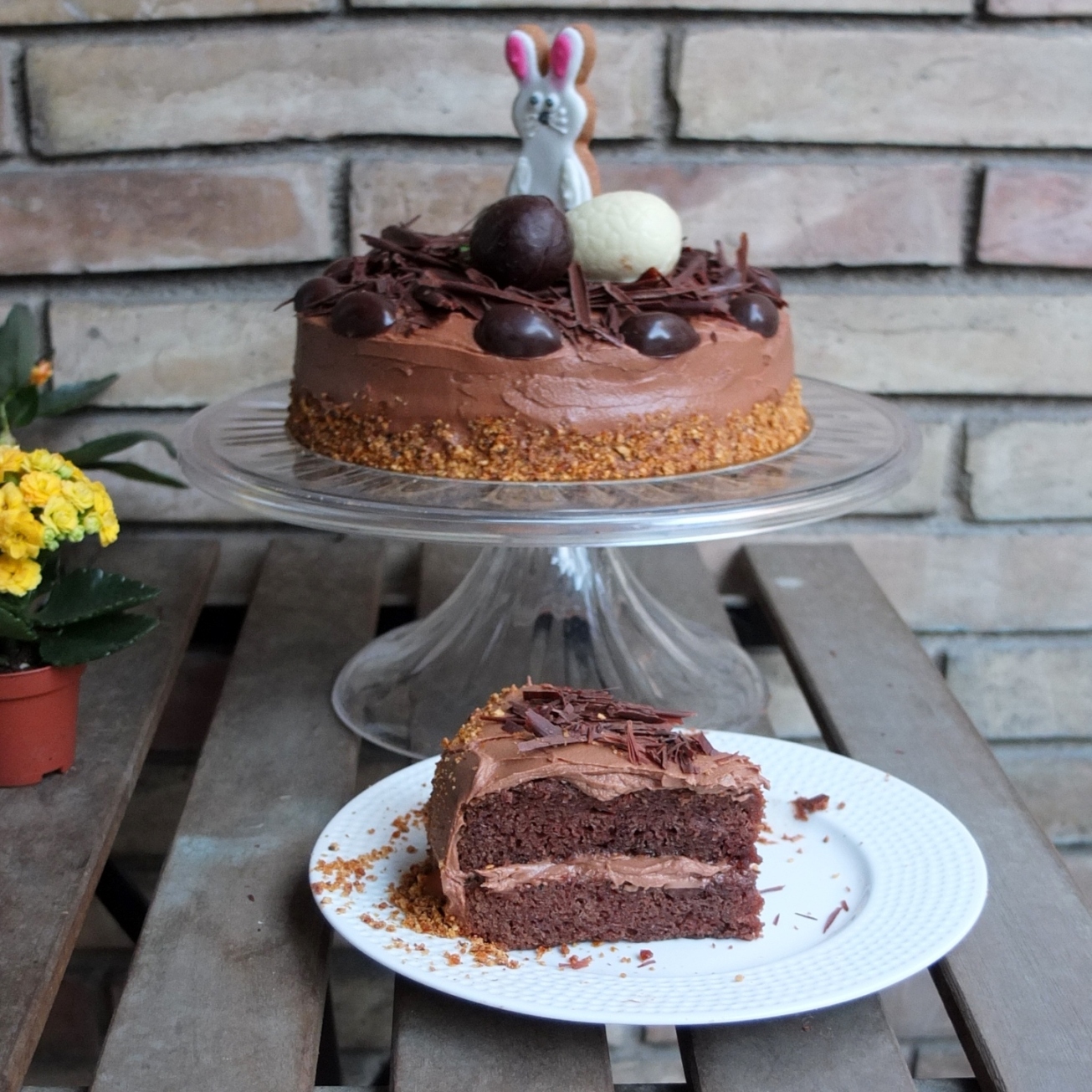 The slice in front is from a prototype test-cake by the way.  It would usually have a fluffier texture but I’m having disturbing oven issues (temperatures too high or low and fluctuating like you would not believe.. sob).  It still works as a moist fudgy cake.  Anyway, yours will be better. 🙂

But before the chocolate cake recipe here’s a quick run-down of stuff made the last few weeks, also involving simpler flavours. Mousse cakes, aka entremets, often have two different layers.  The plan was a layer of raspberry then caramel mousse but I ran out of steam before the caramel mousse stage!  Yes, even I have limits.  lol.  So it turned into a Very raspberry mousse cake with pistachios and thin layers of raspberry curd and raspberry glaze.  Light, sharp and delicious like a raspberry, there’s something to be said for mono-flavours.  Various cake testers and Instagram friends absolutely loved it so the recipe’s coming soon!

There were pink macaron shells decorating this cake and the extra shells were filled with left-over raspberry curd, goats’ cheese and black sesame seeds. Unfortunately the raspberry jostled unhappily for attention and lost to dominant goats’ cheese then the black sesame turned up late to party on the palate.  Interesting, but those with just raspberry curd were better.  Oh, and sprinkling some shells with gold powder just before baking worked!

Some Easter treats included the ultra-moist Tropical Simnel Easter cake with Guinness or rum, which packs a lot of flavour and a savoury Torta pasqualina, a spinach, ricotta and egg pie, traditionally baked in Italy for Easter.  There’ll be more tweaking and eating of the torta before the recipe hits cyberspace.  My chocolate hen was made using a beautifully-shaped mould bought in Gadgets and Cuina, Barcelona (they have online ordering) with tempered milk chocolate:  brush three layers into the mould (refrigerating until firm between each layer) and make the edges thicker.  Then unmould, brush melted chocolate on the edges and stick the halves together, which is when you discover how difficult it is keeping everything clean and free of fingerprints.  I’ve now bought thin plastic gloves.  The hen is filled with little chocolate eggs by the way. 🙂

I need to make some of those healthy Easter bliss ball eggs and cocoa bites.  Soon!  🙂  Meanwhile let’s look at that chocolate cake!

I must confess I bought the rabbit and feathers from a local bakery here in Barcelona where a very sweet little woman served me and brought out an enormous bag of feathers for me to choose from.  But I did make everything else.  This recipe is more of a point of departure and inspiration for you to create your own lovely Easter cake.  Many of the monas here have fluffy little yellow chicks on top.  Or you could have a big Lindt chocolate bunny surrounded by shop-bought mini chocolate eggs.  All the decorative elements below are optional and replaceable.  And it’s a lovely cake even without the feathers.

To make this cake you’ll need:

Yay!  Happy Easter cake time!  I couldn’t resist including photos my friend sent me of his niece and nephew with the cake.  They’re so cute!

Of course you could make this cake all year around or for birthdays, and decorate with other stuff. 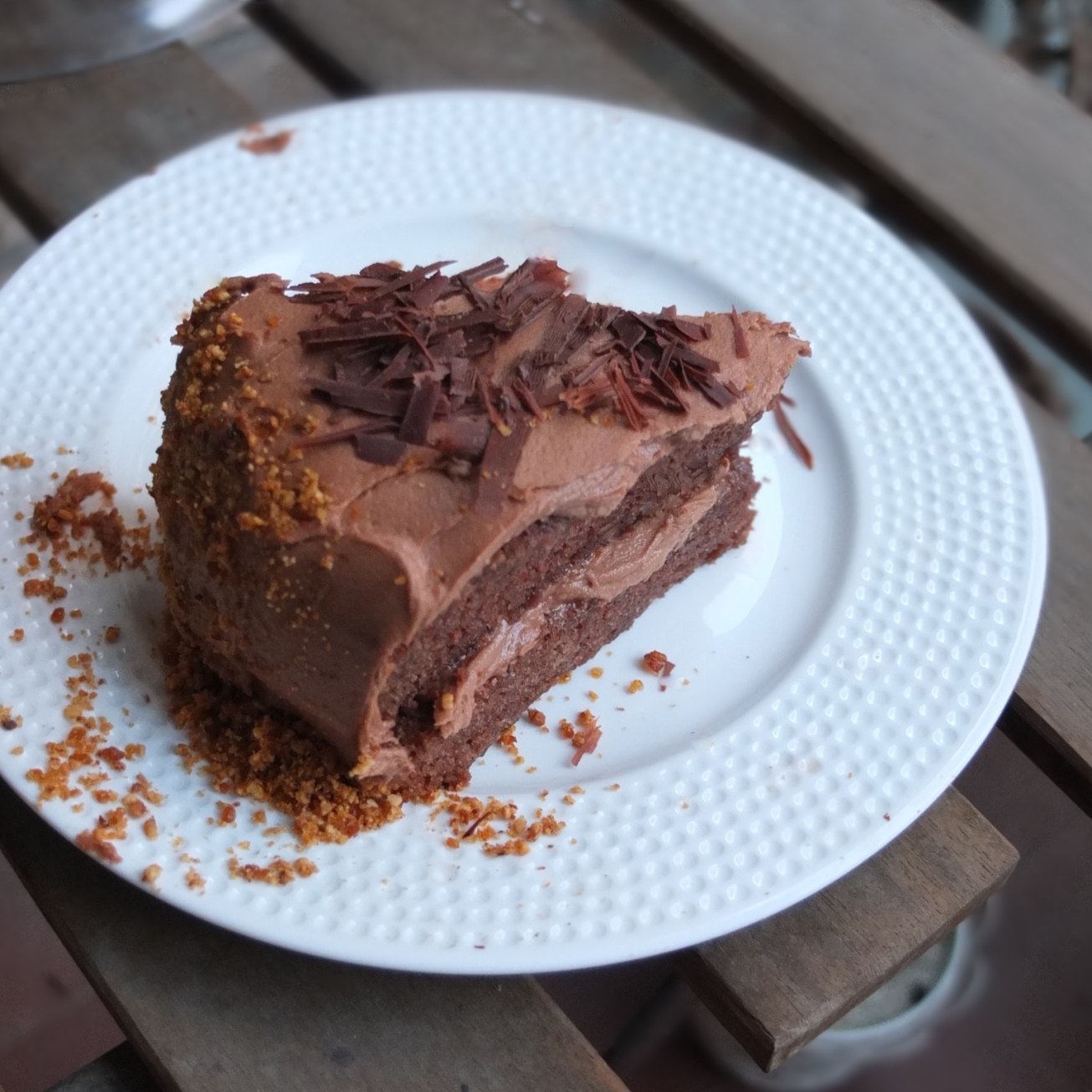 Eating and storing this cake

This cake keeps up to 3 or 4 days in the fridge (maybe more) in an airtight container.  VERY IMPORTANT:  take out of the fridge 1 hour before eating so the icing becomes soft again (the cold butter and chocolate in it makes it hard).

Part of me still thinks oh I should have made a nice French buttercream but the icing works.  All my adult friends, including a French climber, enjoyed their slice of test-cake and said kids would love it.

Here are some chocolate monas de pascua I saw in patisserie window displays today while walking around my local area.  As you can, there’s quite a flurry of feathers!

Catalans will be giving these to their godsons and goddaughters in the next few days and traditionally it was eaten by the whole family on Easter Monday.  You can see more about monas (including some chocolate sculptures) and Catalan Easter traditions on my recipe post from last year for traditional monas – Spanish Easter egg breads.

Hope you’ve enjoyed this slightly crazy colourful Easter chocolate and vanilla cake for children … and maybe adults? 🙂  I had fun making it and am now a little less afraid of cake decoration.  You might enjoy making this cake too! 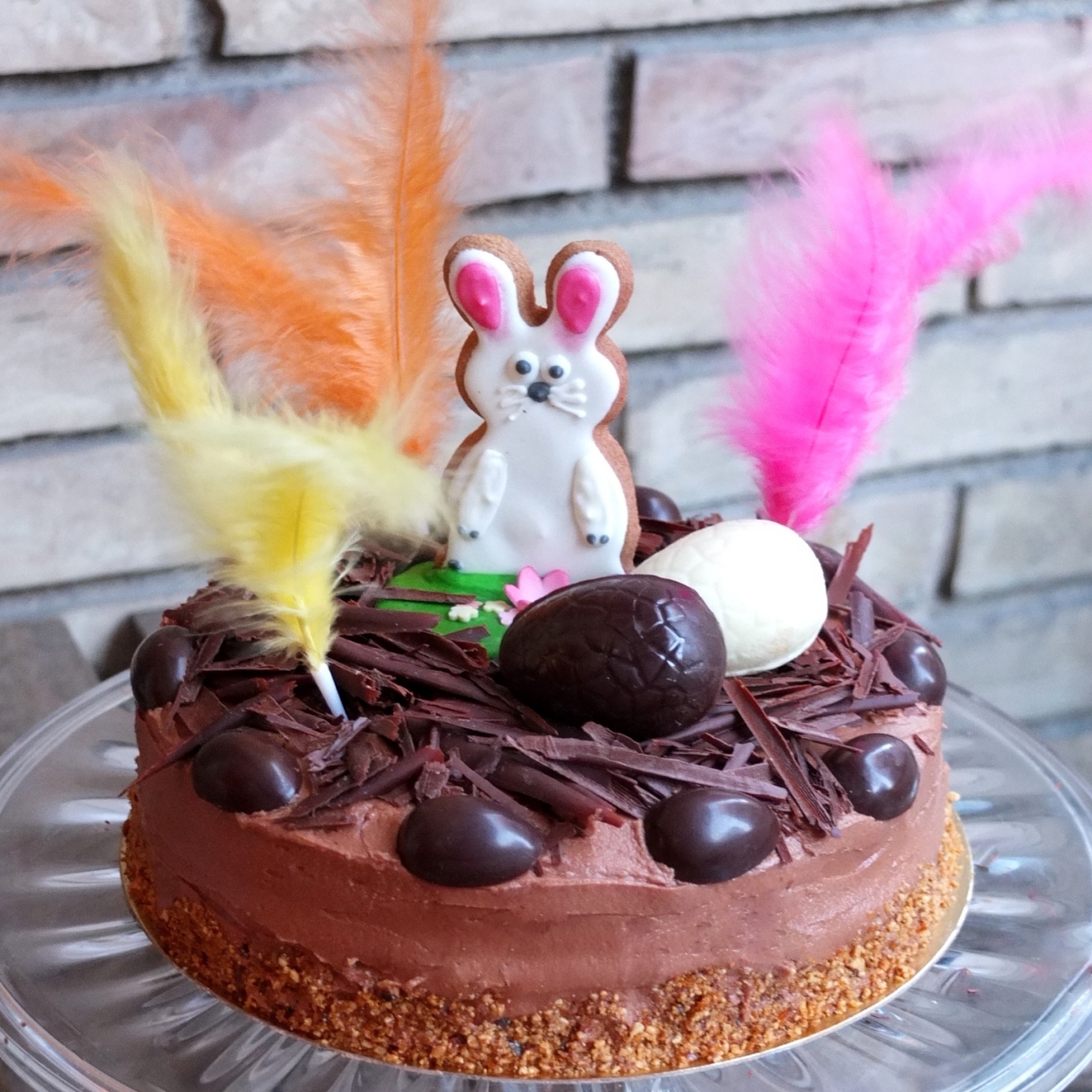 Nice to see you here (again) sweet reader!  Whether you celebrate Easter or not I wish you a lovely weekend eating lots of wonderful things and having a brilliant time!  Happy baking and eating! 🙂 x

14 thoughts on “Easter stuff and a moist Easter chocolate cake recipe for children (or adults)!”