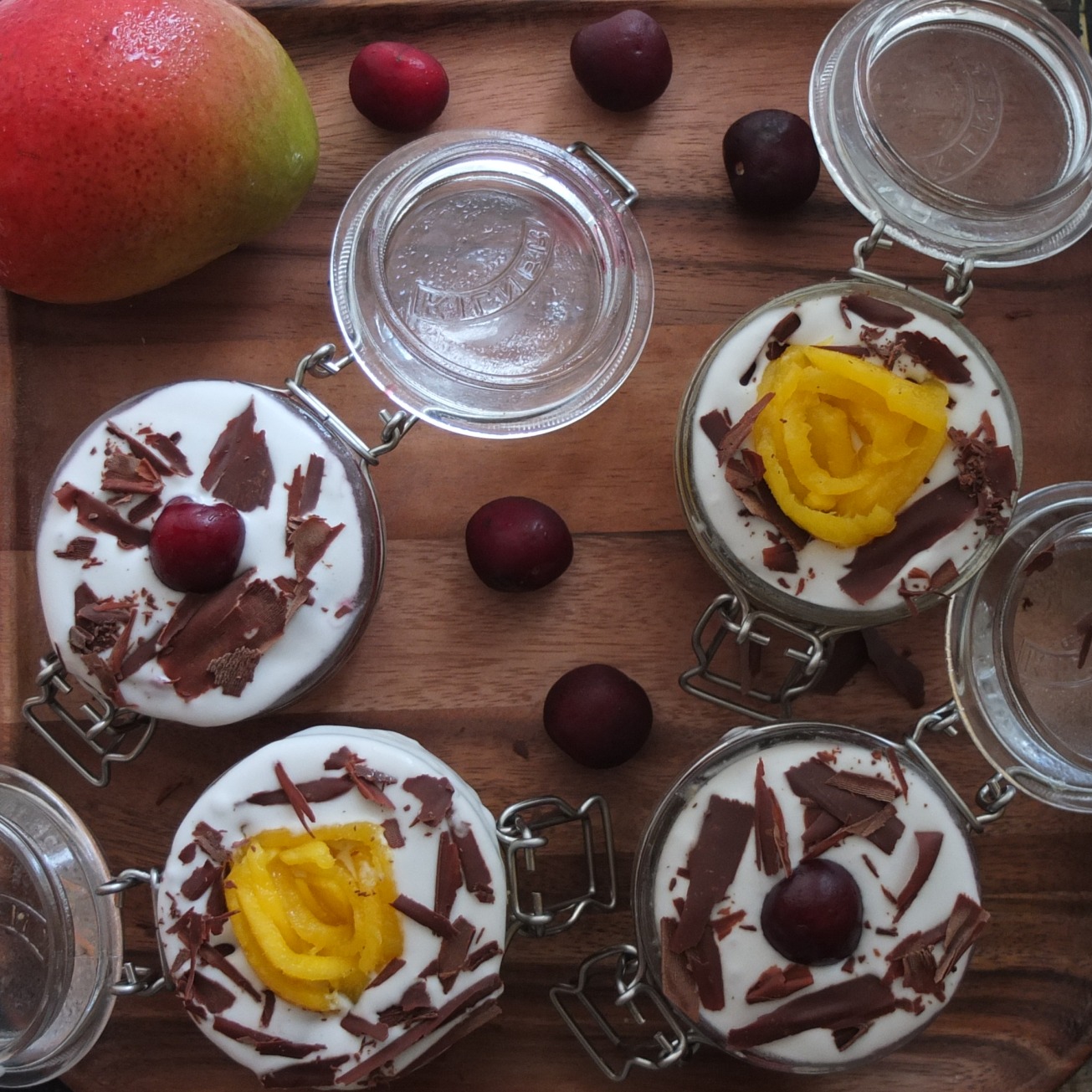 Would you like to experience the joy of an easy, no-bake delicious yet healthy dessert?!  Get five jars and your favourite fruit – in half an hour you too could be tucking in!  These incredibly yummy treats were inspired by my first encounter with a banoffee pie in a jar at a local restaurant recently.  Did you know banoffee (banana + toffee) pie is a classic English dessert developed in 1971? More info on Wikipedia here.  Now back to the restaurant:  my friends and I were full so we shared a jar for dessert, which promptly turned into a frenzy of spoon digging and yum yums.  I was so surprised by this scrumptious pie in a jar and also left with a craving for banoffee (yes, crazy idea sharing a jar with 3 people).  So it was off to the kitchen to experiment with a healthier version.  Then some IG friends were posting for a mango party, so I thought:  let’s go mangoffee too!  A week later some cherries in the fridge begged their way into the experiment then the sour cherries in a jar got in there, adding a lovely tang.  I sense the raspberries will be joining soon!  Anyway, you get the idea:  rope in some fruit and make these delicious no-bake pies in a jar, with a lightly crunchy oats and nuts crumble base, a heavenly smooth date caramel (aka toffee), and delightfully refreshing fresh fruit layer.  All topped with light creamy unsweetened coconut milk.  Simple and amazing.  So you’re invited to a fruit-offee party with some mangoffee, cheroffee or banoffee pies in a jar!  Bring any fruit you like! 🙂

Healthier mangoffee and banoffee pie in a jar

Healthier cheroffee pie in a jar

These are invented and inspired by different recipes and ideas, with elements adapted from a non-jar version:  Banoffee Pie from My New Roots on the Oh She Glows blog.  Mine had a baked crust.

It was super yummy but banoffee pie is a messy thing so maybe it’s better off in a jar?  Ahem.  Anyway after weeks of testing here’s the recipe for you. 🙂

You can play around with the ingredients, using oatmilk or cow’s milk instead of almond milk, replacing the nuts with others you prefer or making the base with just oats if you’re not into nuts.  But I do love this nutty crumble… 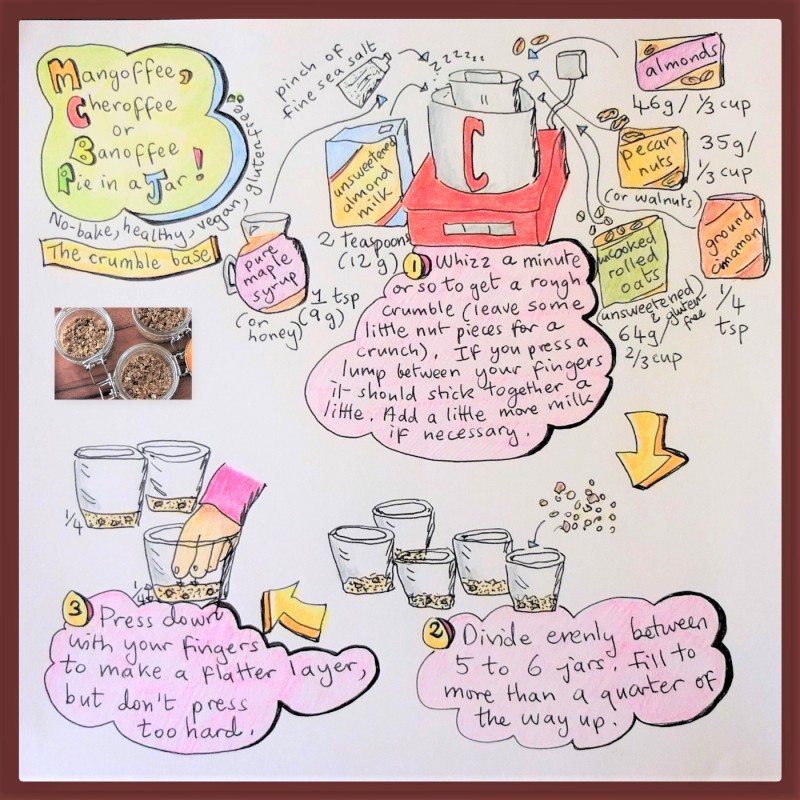 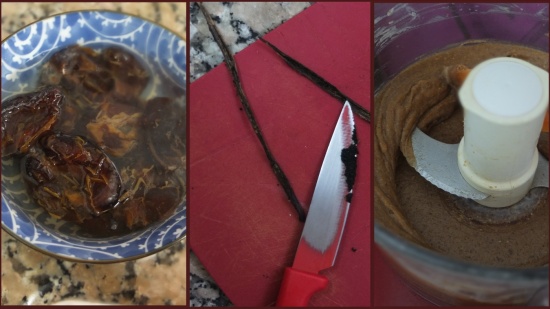 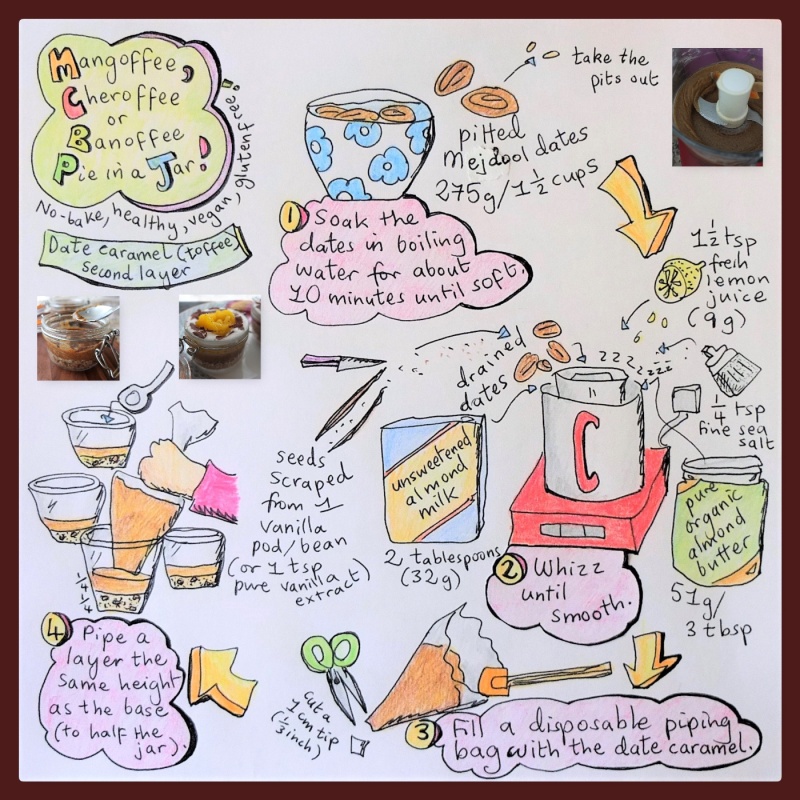 These are approximate quantities, depending on your tastes and size of fruit (note: coat banana slices in the juice of one lemon so they keep better and don’t go brown). 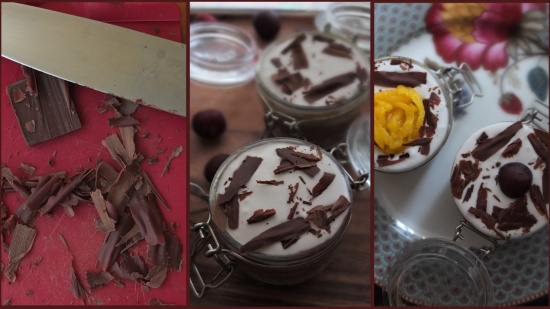 It’s not hard to make a lopsided rose-like mango shape following a nice explanation on youtube:  Mango rose tartlets video (watch from 8:00 to 9:10).

Healthier mangoffee pie in a jar

Chill your pies in the fridge for 1-2 hours before eating.  Cover in plastic film to store if they’re in glasses.  They’ll keep in the fridge up to 3 days (maybe 4-5 but they haven’t lasted that long yet).

So there you go, yummy pie in a jar.  Which one would you like?  Mangoffee or classic banoffee?  A few of spoons of each maybe?

Have some banoffee and mangoffee pie in a jar!

A sour cheroffee one?  Hope you’ll be inspired to fruit-offee-fy after seeing these banoffee, mangoffee and cheroffee pies in a jar! 🙂

14 thoughts on “Healthy mangoffee, cheroffee and banoffee pie in a jar recipe! No-bake, vegan and gluten-free!”