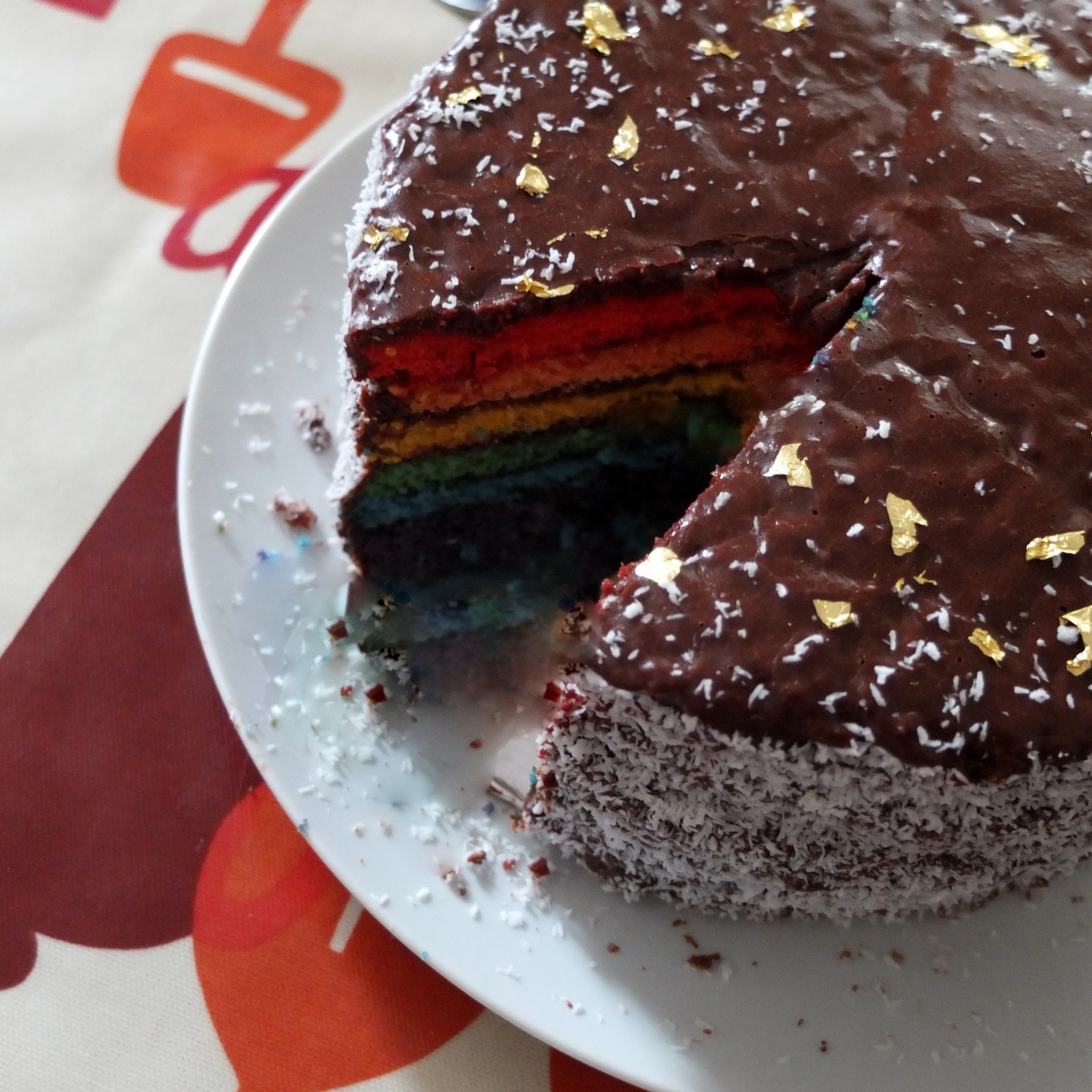 A colourful, magical rainbow in a cake.  Who could resist?  Okay, maybe people like my brother who have strong feelings about E numbers in food.  I did try using natural food colouring, I really did.  But that plan failed and I’ll explain why later.  Wait, don’t leave yet!  This is actually a butterless sponge made with cornflour and so a gluten-free cake filled with alternating layers of raspberry jam and cocoa icing, which also covers the cake.  Finished off with a fine coating of dessicated coconut.  It’s a stunning cake I’d been wanting to make for ages.  So with my niece’s and nephew’s birthdays coming up I thought ‘Hurray!  Rainbow cake!’  🙂 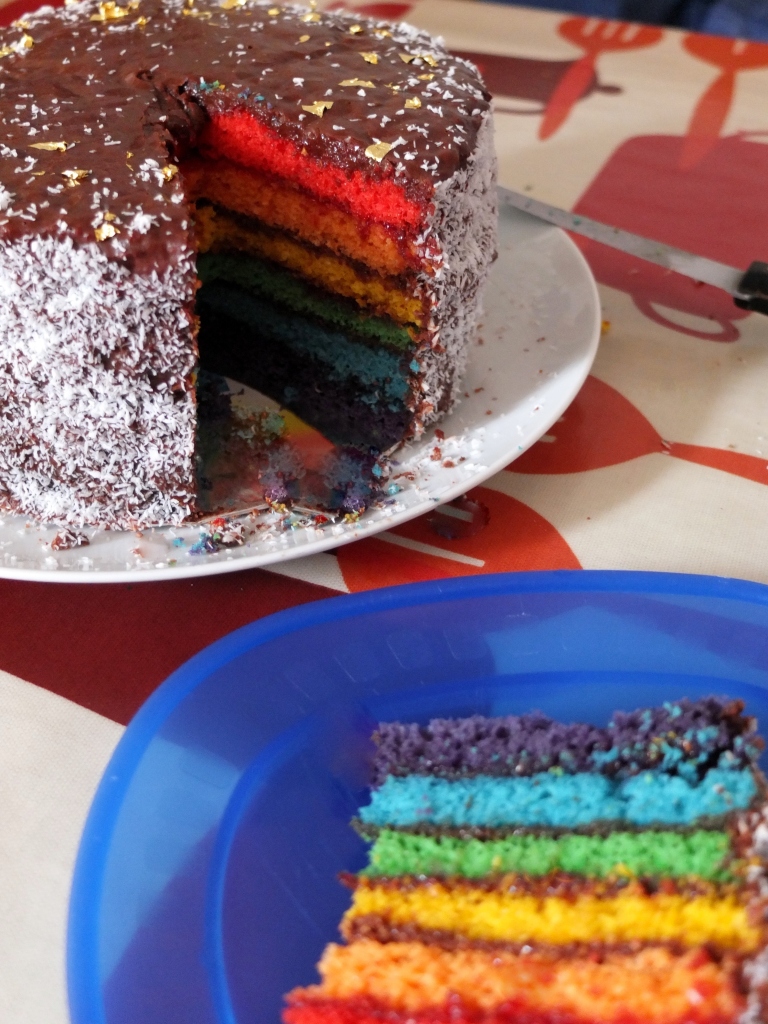 Though others may have made it before, the original ‘famous’ rainbow cake was reportedly invented in 2009 by Kaitlin Flannery of the Whisk Kid blog.  She says she created it for a friend because the outside is iced and looks completely normal but once you cut into it you realise the cake is COMPLETELY CRAZY, like her friend! 🙂

So when I arrived at my brother’s home in Birmingham, I brought a lovely normal-looking cake but warned my healthy sibling he wouldn’t want to eat it.  He said he would – little did he know!  In preparation for his moment of enlightenment I presented him with that healthy biker fruitcake made with spelt, honey and brown muscovado sugar.   Anyway, back to the normal birthday cake:

My niece had fun blowing out the candle as we sang Happy Birthday to her. 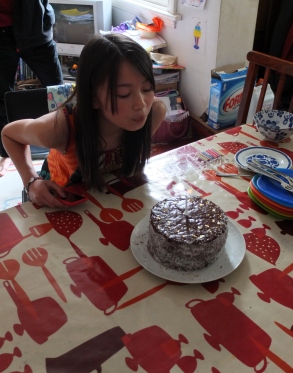 She’d already had a birthday cake earlier in the week but there’s no limit on this kind of thing.  So we thought her brother Oscar (whose birthday followed hers by one day) should blow a blue candle out!  More singing! 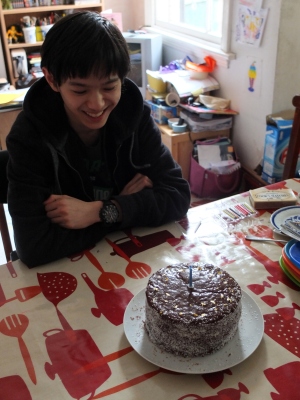 We were getting a lot of mileage out of just one cake!  And so much fun we offered to repeat the singing and candle-blowing ceremony for my younger nephew.  He sensibly declined, saying his birthday had been ages ago in February.

Then came the crazy moment.  I cut two slices of cake.  Gasps.  My brother walked away ‘I’m not eating that!’

Not unexpected.  Enter the brother back-up plan B:  that healthy fruitcake he later tucked into and loved. He enjoyed getting a bit drunk on the rum in it.

Meanwhile the rest of us started into the colourful cake! 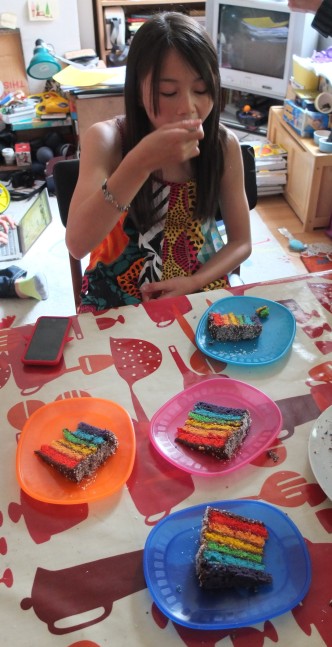 We sat around munching on this bright creation and decided it tasted lovely so had second helpings.  Then two of us had a third slice (mine was for research purposes).  My 16-year-old nephew ate it, mentioned the word ‘sugar’ but said it didn’t taste of colouring.  My 11-year-old niece loved it.  I was quite proud.  I usually avoid artificial colourings or flavourings and wouldn’t eat this cake often but I do love colours and it was kind of stunning! 🙂 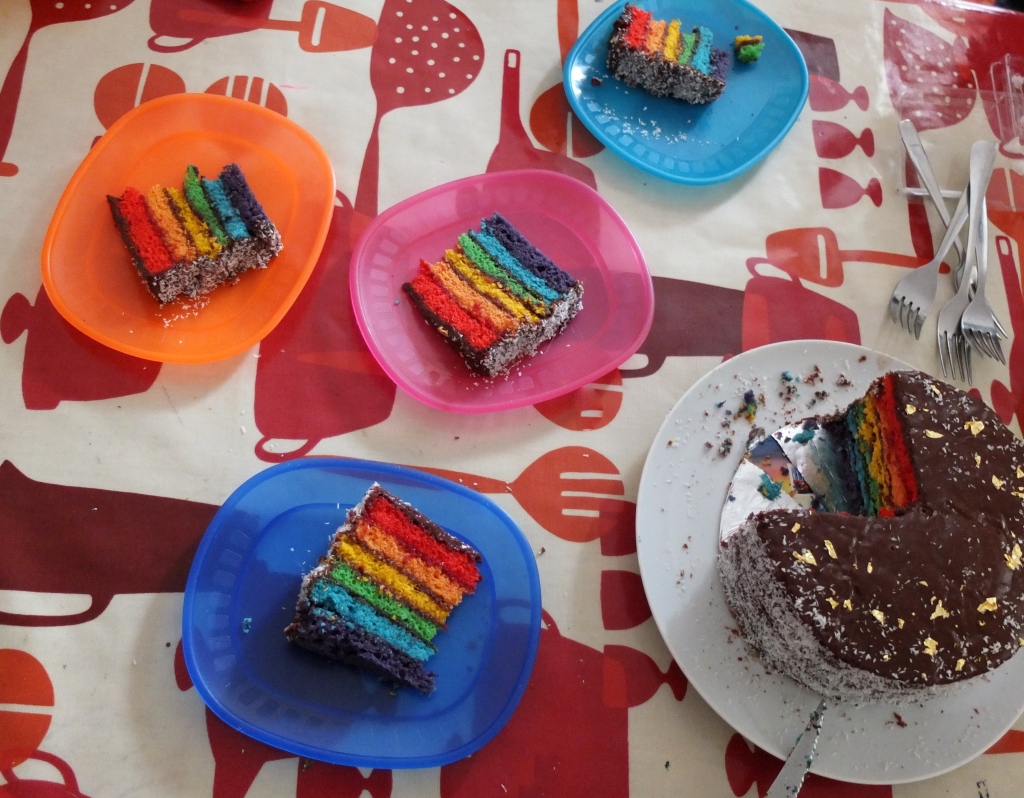 I am very partial to rainbows.  We learnt to order the colours of the rainbow at school with Richard of York Gained Battles in Vain ( Red, Orange, Yellow, Green, Blue, Indigo and Violet).  Good, eh?  Feel free to do the seven layers if you prefer but here we’ll be doing six and merging indigo and violet into a kind of purple-ish layer, which is hidden underneath somewhere in this photo! 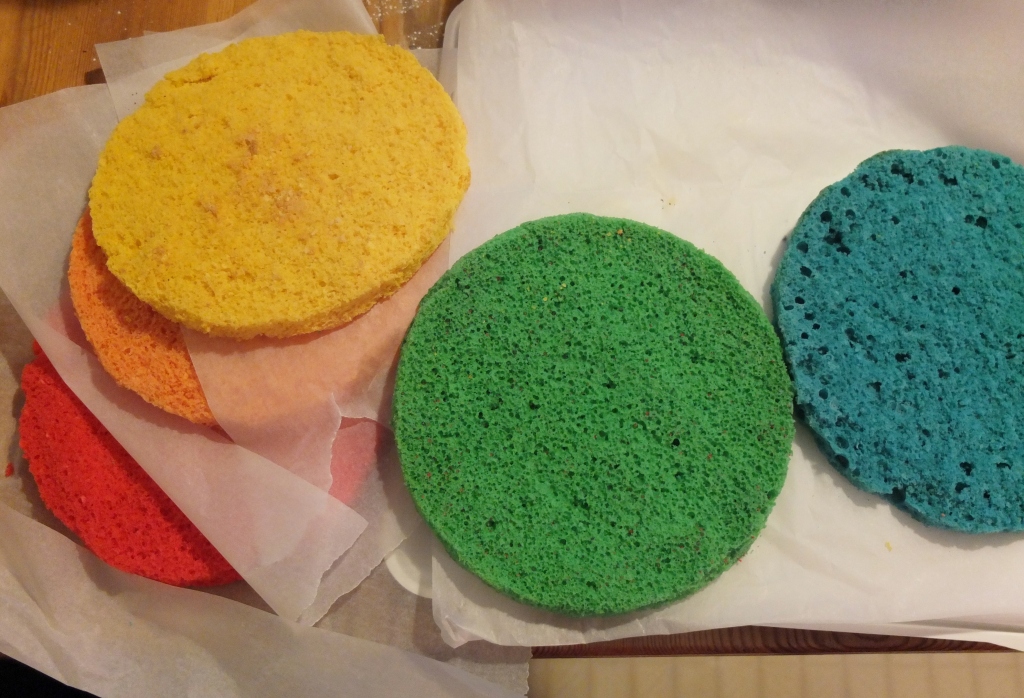 What I learnt recently is the natural food colourings I bought are ‘not very effective’.  They were producing some yukky palid colours in my cake mixtures so I’m afraid I threw in old-fashioned food colouring gel and hey presto, proper rainbow colours! 🙂 or 😦 !

In Kaitlin’s original recipe a butter sponge is used that you could do instead.  Here’s the link to her Super-epic rainbow cake, including a video of her making it with Martha Stewart so you can observe the layering process.  You’ll also see Kaitlin is as cheerful and friendly as her cake.  No worries, if you’d like a nice simple and easy option I do encourage you to go over to Kaitlin’s recipe.  Or to the Baking Hermit’s go-to rainbow cake, which inspired me to take the plunge and make this one.  I’m planning to make hers one day, with the lemon cream cheese buttercream!   This time round Australian Lamington cakes, dipped in cocoa icing and rolled in coconut, were a big inspiration.

To get a spongier lighter cake you’ll need to bake layers in three batches.  Sorry.  I’ve tried making three layers at a time, but two always came out dodgy:  flatter and sadder because this delicious genoise sponge with baking powder isn’t built to hang around waiting to go in the oven.  So you cut down on waiting time doing just two layers simultaneously, and putting them in the oven fast.  The chocolate icing, layering and glazing are all dead easy.

Of course as this is a special cake you’ll make time and imagine the look of wonder and delight on someone’s face when the cake is cut and they see your rainbow!  Better than the mythical pot of gold at the end of it. 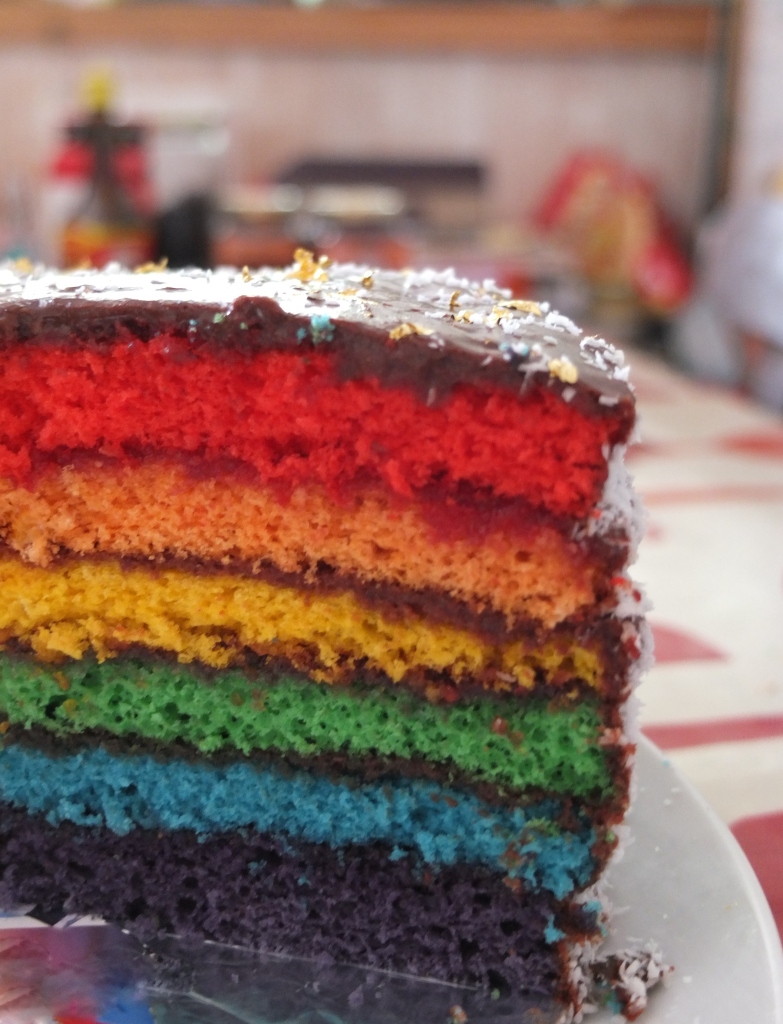 Quick snowstorm alert:  measure, pour and sift the cornflour gently so it doesn’t rise up in a white cloud covering you and all your surroundings.  You could shuffle innocent bystanders away from the immediate vicinity and cordon off the area. 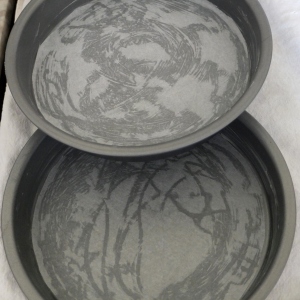 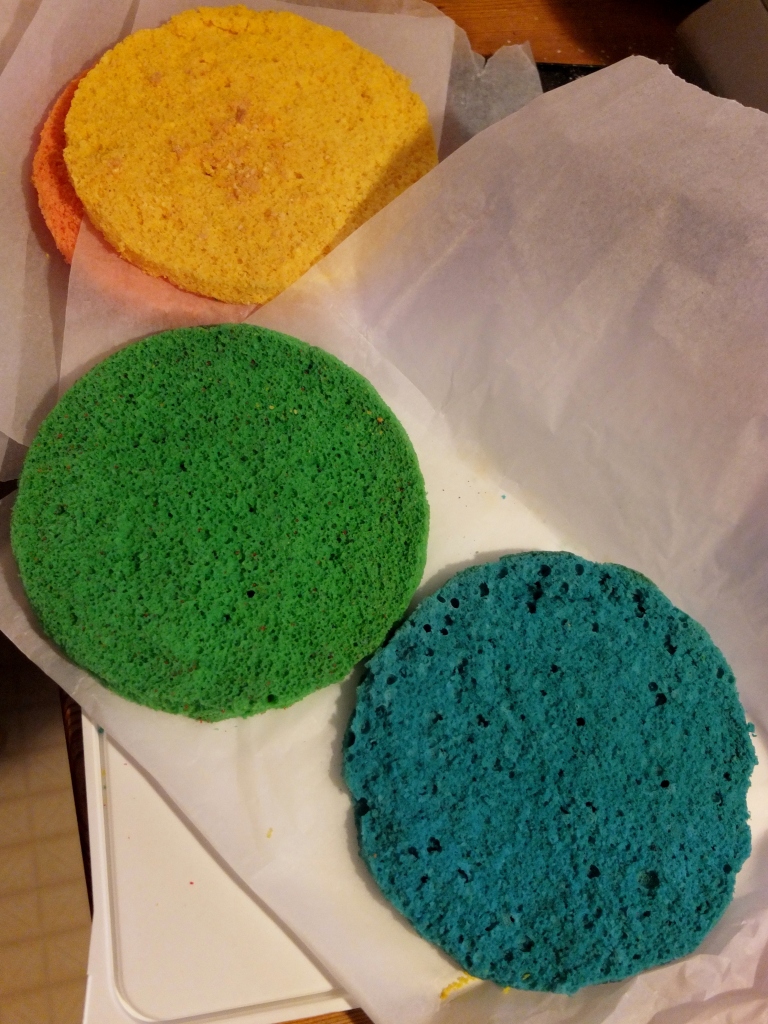 A gold circle the size of your cake (18-19cm diametre) or cardboard circle covered in aluminium foil.

Make the chocolate icing by sifting the icing sugar and cocoa into a heatproof bowl.  Whisk in the melted butter and 180g/1 cup of the milk.  Add more to thin the icing if necessary.  Taste to check if you need more sugar or cocoa (to taste).  Whisk over a bain marie (a little water that’s simmering gently on a low heat) – the water should not touch the bowl.  You want an icing that’s liquid enough to cover a cake with a thin layer but not too runny or thin.

Place your bottom layer on the foil or gold circle and place on a wire rack over a large baking or oven tray.

Start with the purple layer

You can do the layering I did this time, …

…  or an alternative with less jam and more chocolate icing: 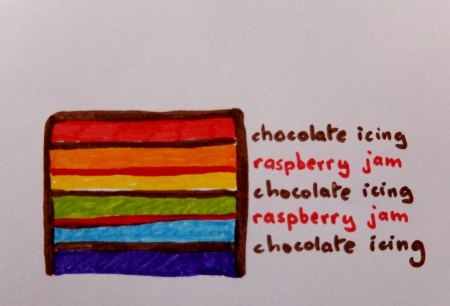 Here are the real-life groovy layers:

Top:  once your final layer is done, pour some chocolate icing on top of your cake.  It should spread out without using a spatula knife.  The top will stay shinier if you don’t touch it.

Sides: use a butter or spatula knife to spread the icing on the sides and cover it evenly.  Then recuperate the chocolate that’s fallen through the wire rack into the tray and store in an airtight container in the fridge for another time.  Clean and dry the tray below the cake.  Place the coconut in the palm of your hand and press against the sides to cover.  You can reuse any coconut that’s fallen into the tray. 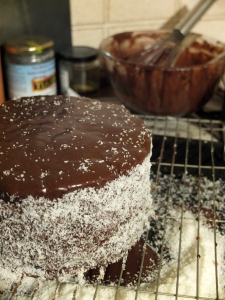 Finish:  sprinkle a little coconut around the sides on the top and add a pattern of edible gold paper.  Or create your own design.

Storing:  keep this cake in the fridge two hours to set before eating or overnight.  It will keep in tupperware in the fridge for up to 3 or 4 days.  My nephew’s eating the last piece with cream right now and says it’s really good!  🙂

I’m very late, but I’ll take this crazy cocoa and raspberry rainbow cake along to the Fiesta Friday party – it might raise a laugh or two!  🙂  With grateful thanks as always to Angie@the novice gardener for hosting this great event and to her co-hosts this week, Juju @ cookingwithauntjuju and Amanda @ The Chunky Chef. 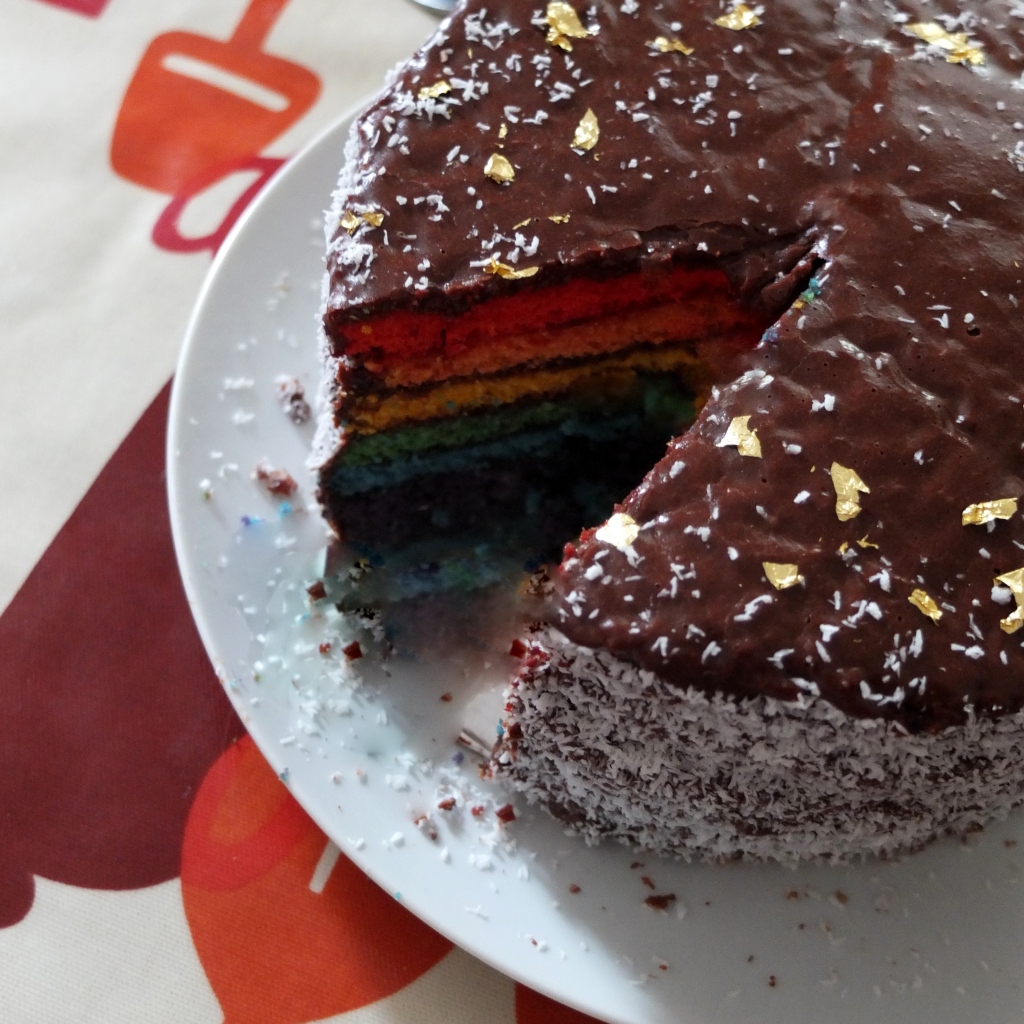 Do you dare have a slice of it?! 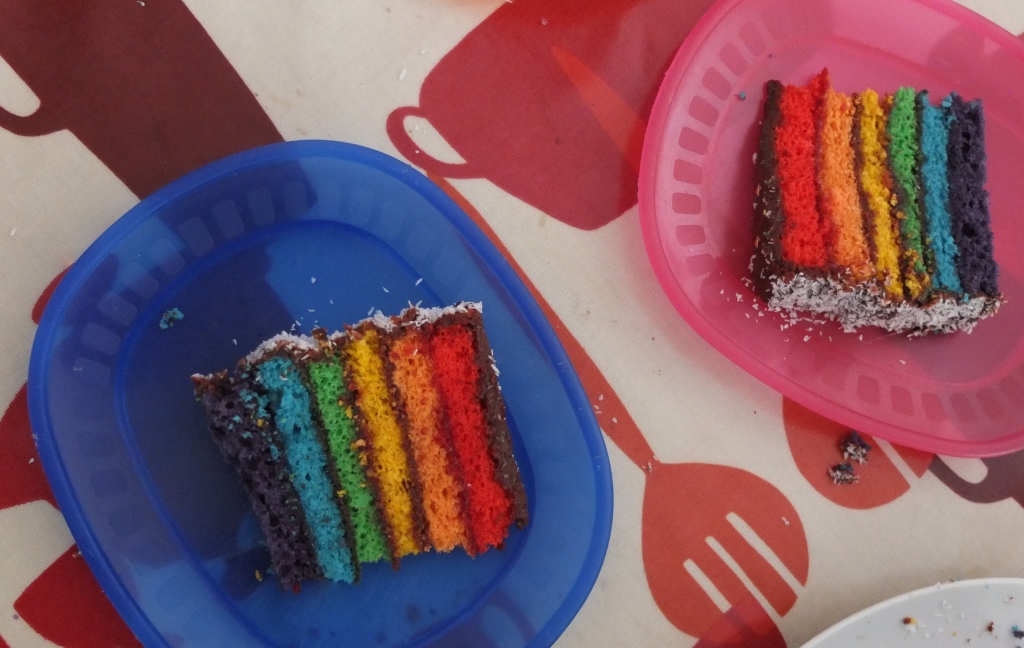 A slice of rainbow cake?!

Don’t worry sweet reader, the next cake will be less mad and definitely healthier!  Hope you enjoyed looking at this rainbow cake through your sunglasses and might even think of making it for a special someone! 🙂  Wishing you a continuing great weekend and a lovely bright week ahead, baking, eating and cooking with or without rainbow colours! 🙂 x