The gauntlet was thrown down by the Daring Kitchen and the challenge accepted, and so it came about that these Turkish Delight (lokum) were made.  In the Land of Narnia the White Queen offered Edmund his heart’s desire and he chose Turkish Delight in exchange for betraying his family.  They seem a troublesome yet tempting sweet, whispering of the mysterious orient and luxury in silver salvers and carpeted tents.  Later I’ll give you a little history behind these treats, not very fashionable in this health-conscious ‘sugar-free’ age yet still they glisten and beckon.  You cannot resist these delicious jewels nestling in powdery sugar – ask my mum!  So let’s throw caution to the wind and make these rose and lime Turkish Delights the traditional way, without gelatine (quick ‘yay!’ on behalf of vegetarians) and with the patience of a Turkish grandmother. 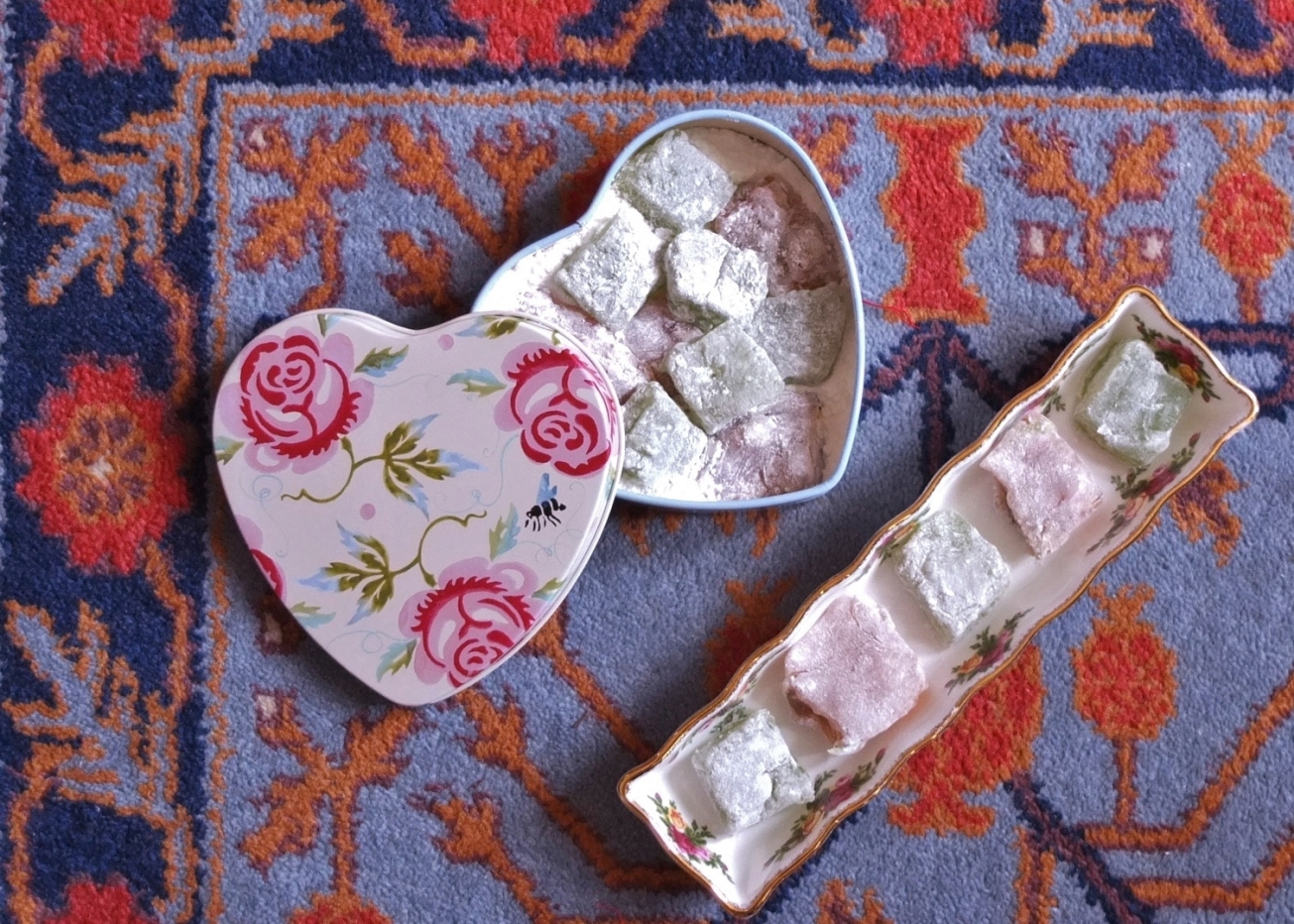 To get in the mood click here and watch a Turkish Delight song on youtube!  With film clips showing Edmund eating these sweeties and his ill-advised pact with the evil queen. 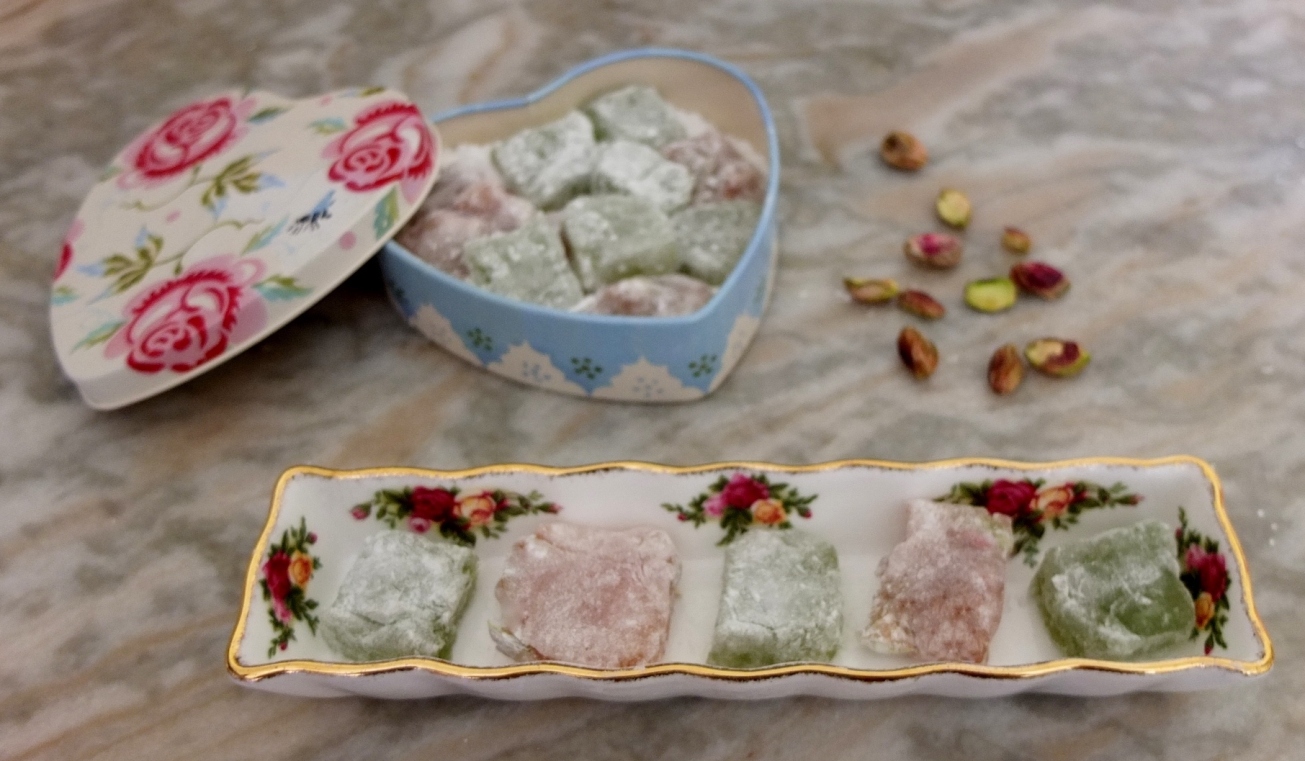 What do you want? the song asks.  Turkish Delight!  So here’s the illustrated recipe for you, also depicting the sorry tale of how we came to be in the kitchen at midnight.

THE RECIPE – based on Annie Riggs’ in her book Sweet Things.

Find two 17cm-square tins or use a larger rectangle and divide by forming a foil tray in one half. Get a sugar thermometre and 2 medium-sized heavy-based saucepans. 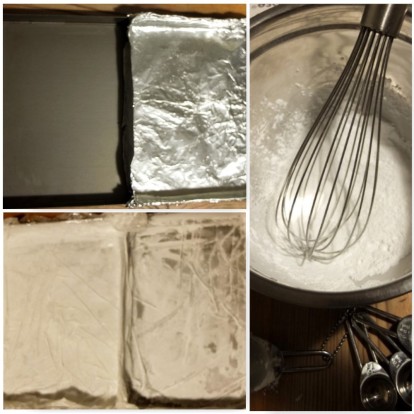 The syrup (in small-medium saucepan no.1)

The cornflour mixture (in medium saucepan no.2) 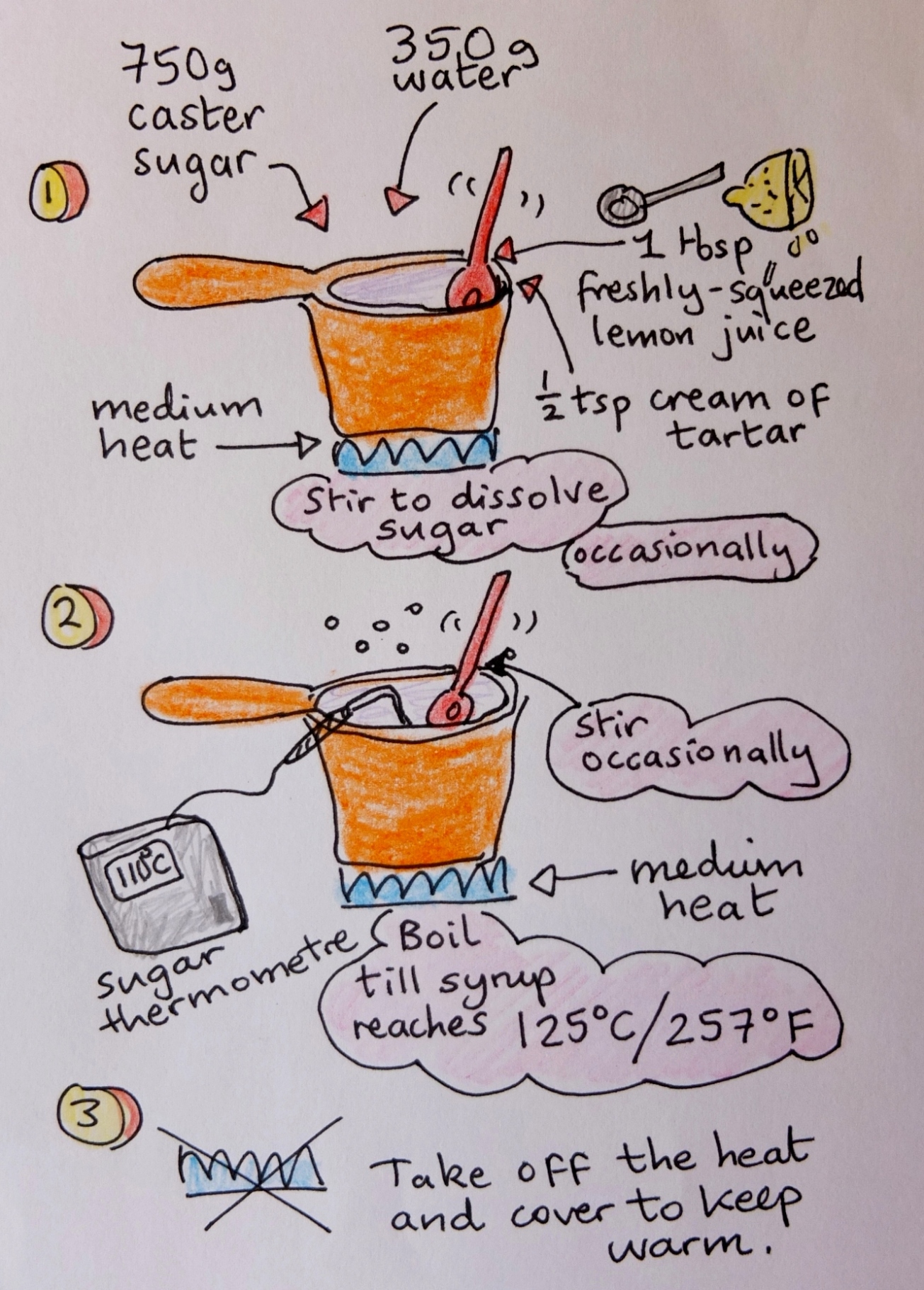 My syrup is browner because I used unrefined golden caster sugar

But wait, there’s a technical problem!  What’s wrong with these photos? 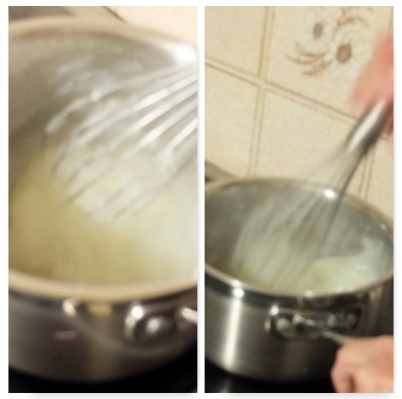 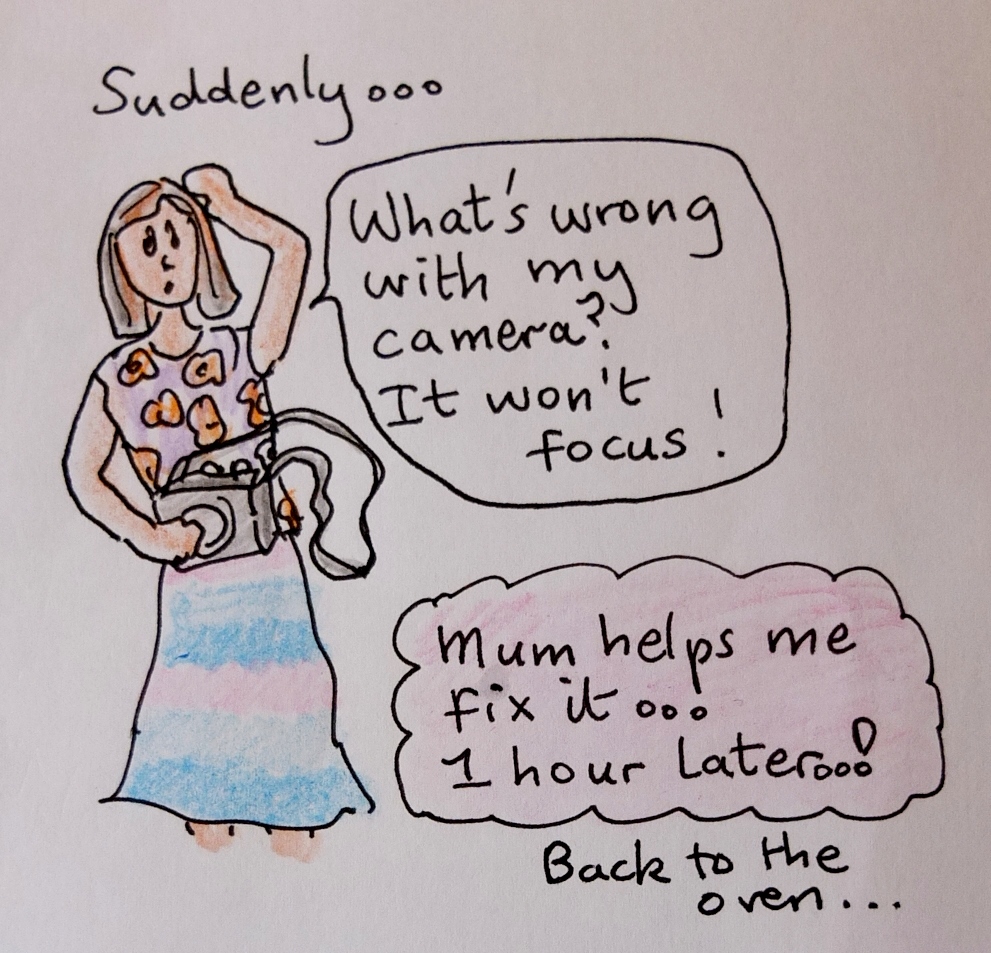 Okay, problem solved finally.  I can take photos for the blog (for you guys) so let’s carry on. 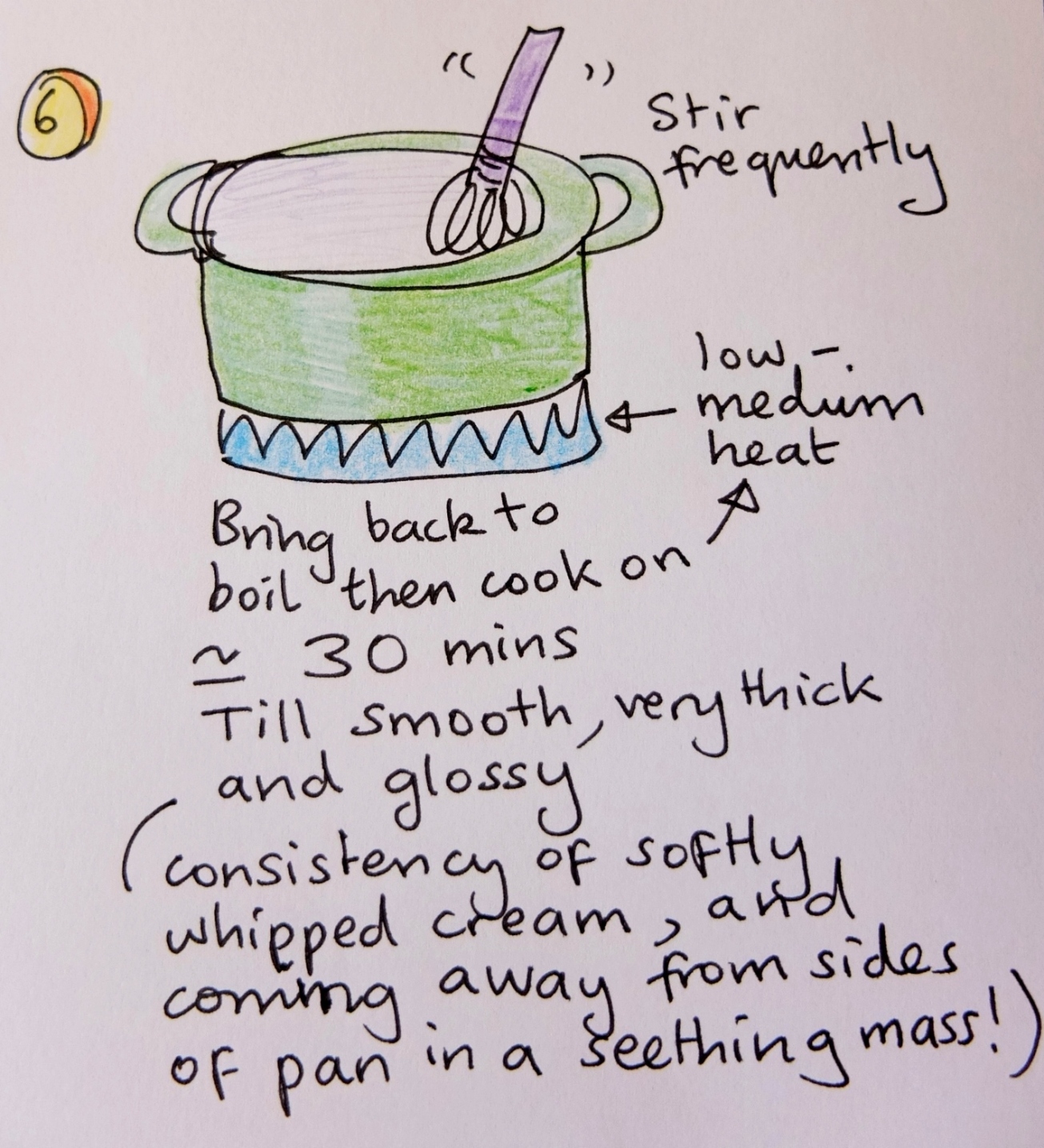 Still, must soldier on…

Translucent and thickened – should be ready.(not going to stay up all night looking for a ‘seething mass’)

The mixture is fine.  But poor ole’ mum… 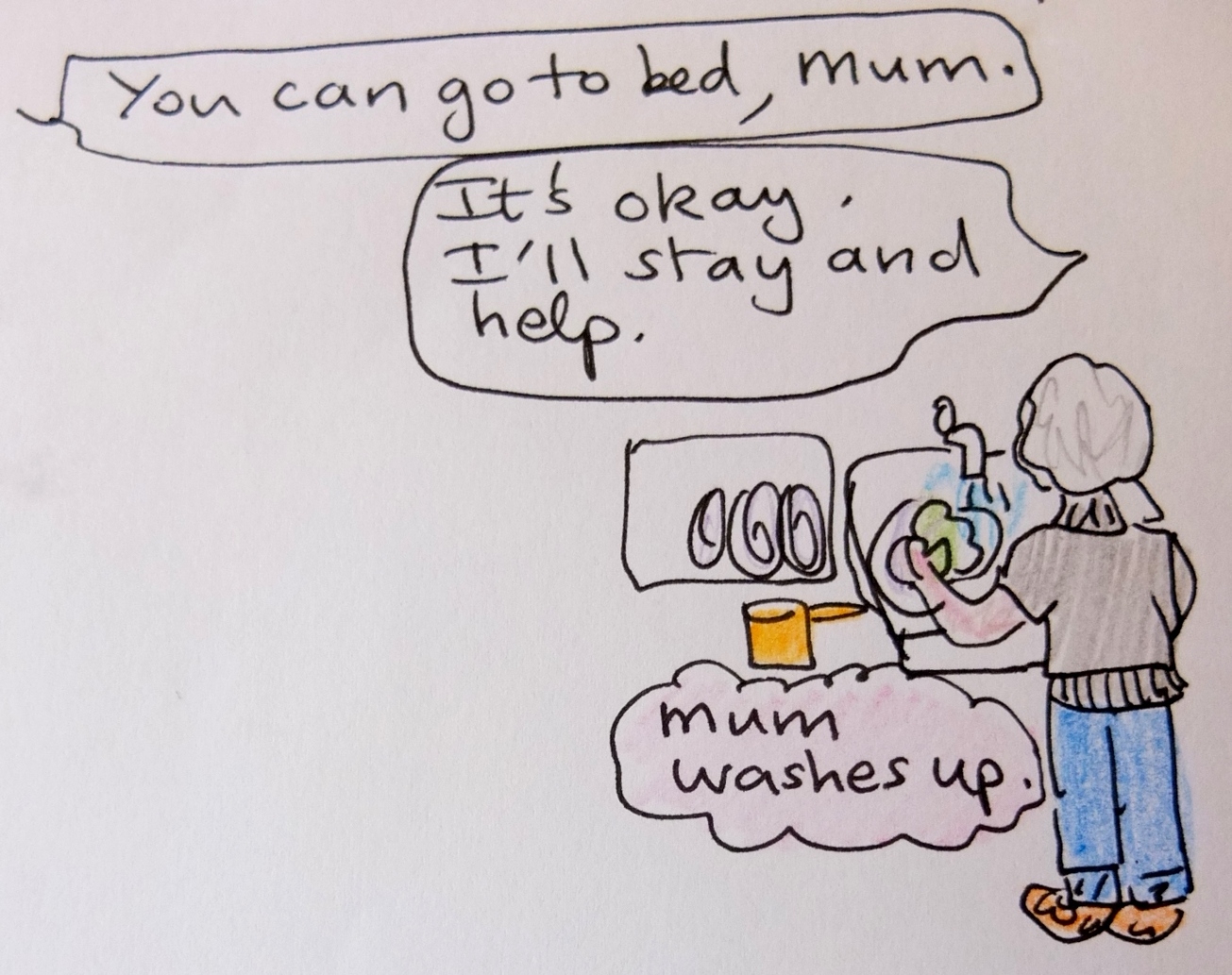 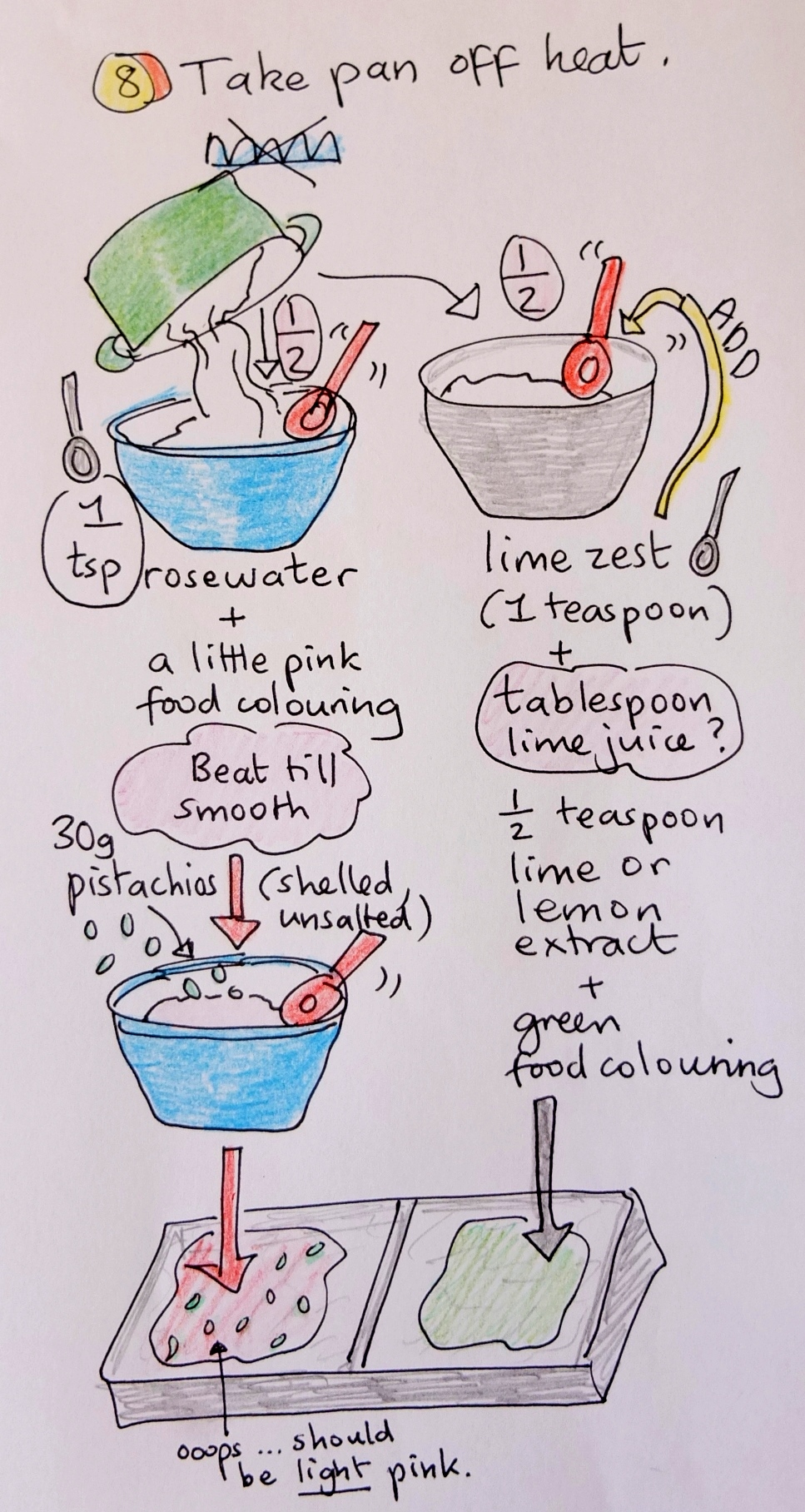 Smaller quantities than expected but not a problem.  I suspect the pink would look pinker with white rather than unrefined golden sugar.

When you cover with clingfilm make sure it’s lightly oiled (maybe even sprinkled with cornflour and sugar) otherwise things get sticky and messy. 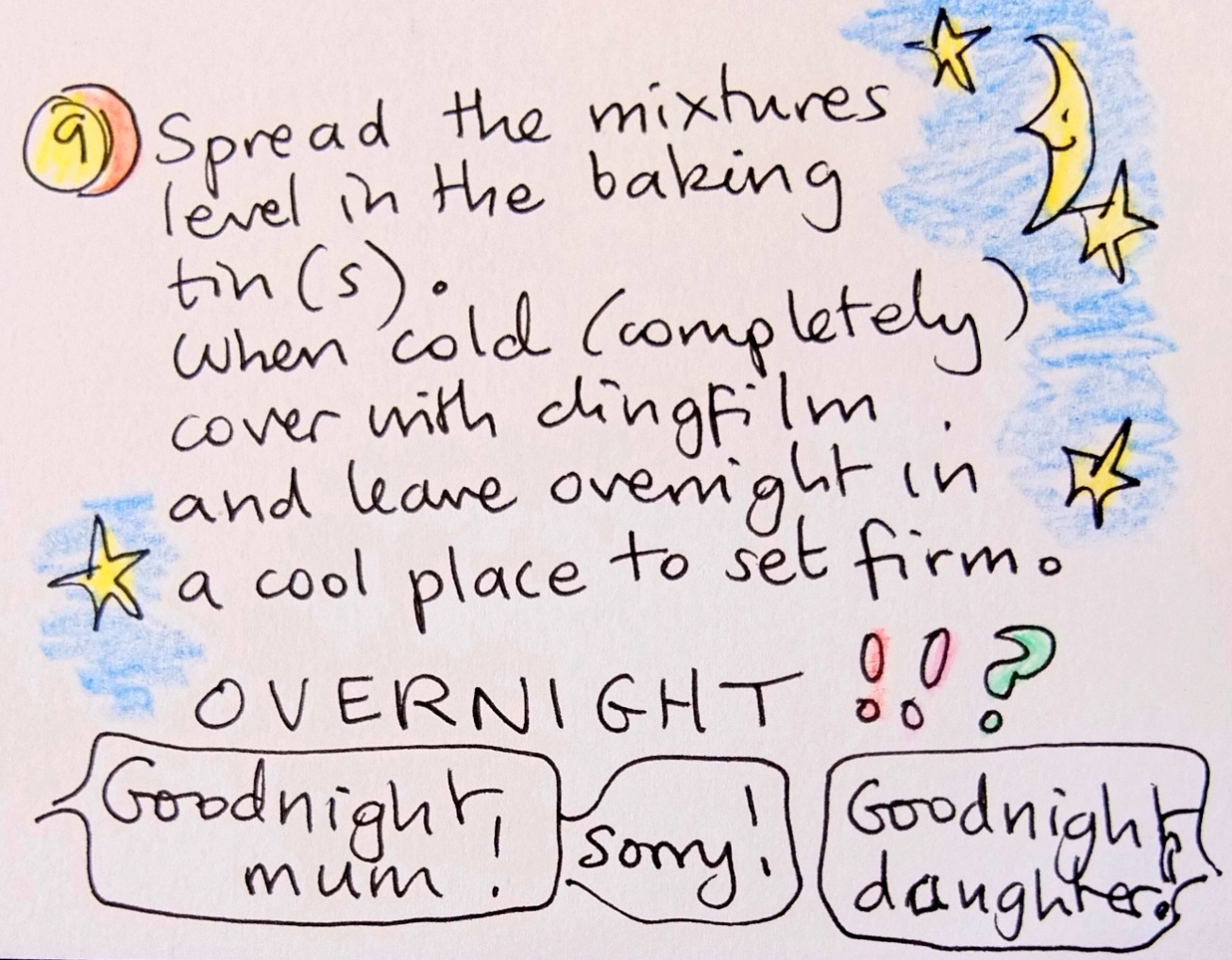 Next morning turn your Turkish Delight onto a tray covered in your reserved cornflour and icing sugar mixture.  With a lightly oiled sharp knife cut squares and toss them in the sugar mix.  Store in boxes packed between this sugar mix and layers of waxed paper, for a week to 10 days at cool room temperature.  Eat!  🙂

So finally there was a happy ending to this sorry tale of midnight sweet-making!  But with a bit of planning you’ll have no trouble at all whipping up your own yummy batch of Turkish Delight. Um.. start earlier in the day or with a helper who’s a night owl, and read the recipe carefully beforehand.  Don’t fiddle with knobs you shouldn’t play with on your camera. 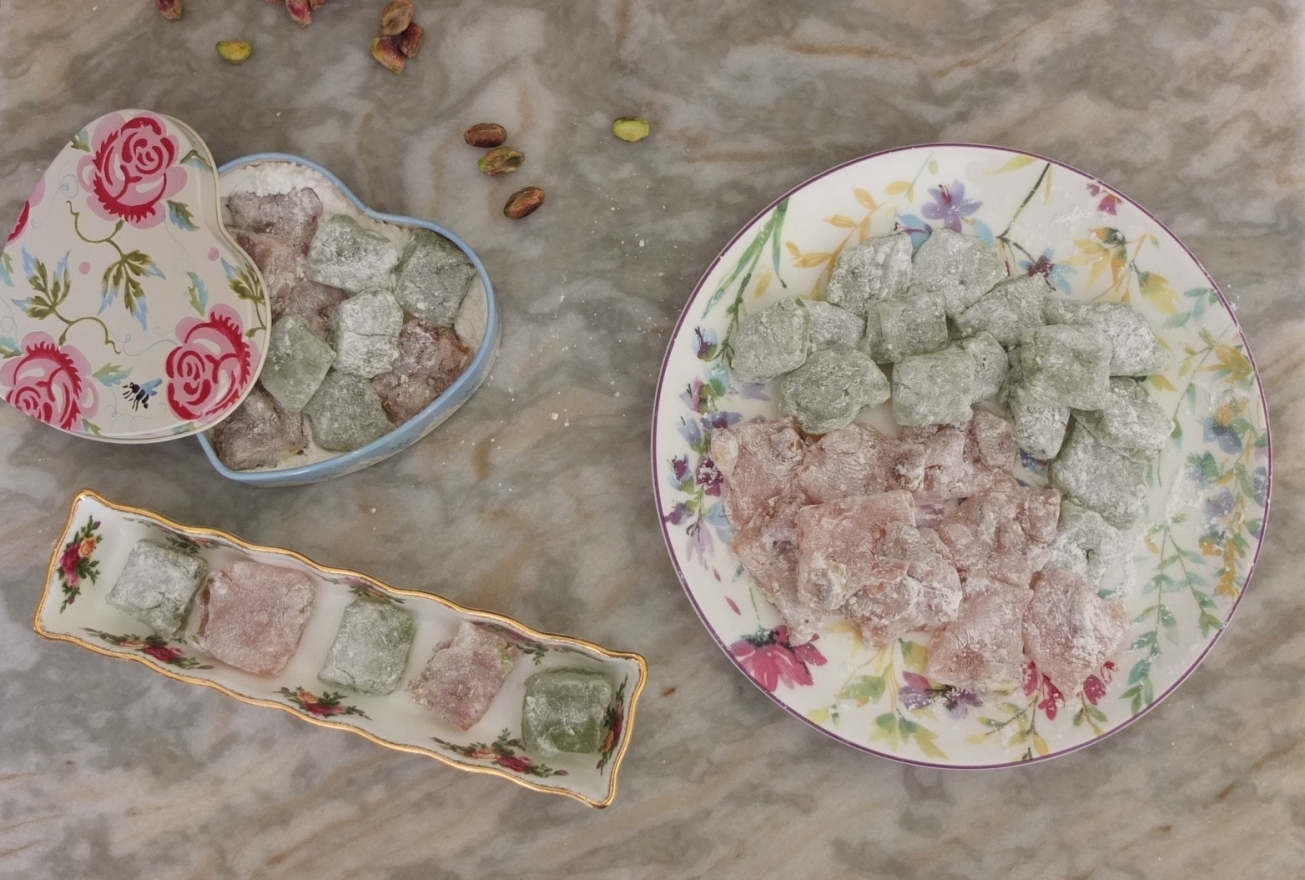 The verdict and other uses

We just made them for the Daring kitchen challenge but found they were so delicious we couldn’t help eating them too!  Never mind the sugar, these exotic morsels don’t feel oversweet or sickly.  On the contrary mes amis, they are well tasty!  Soft, tender and moreish.  A million miles away from the commercial stuff and nearer to the magical sweets sold in Turkey.  I’ve read the gelatine ones are not nearly as nice so I’ll make these traditional ones again one day.  You can use them to decorate cakes where they’ll glisten like jewels, like Confarreo did with her Turkish Delight inspired Bundt….Rose and Lemon.  Beautiful.  Can you imagine mini cubes on cupcakes? 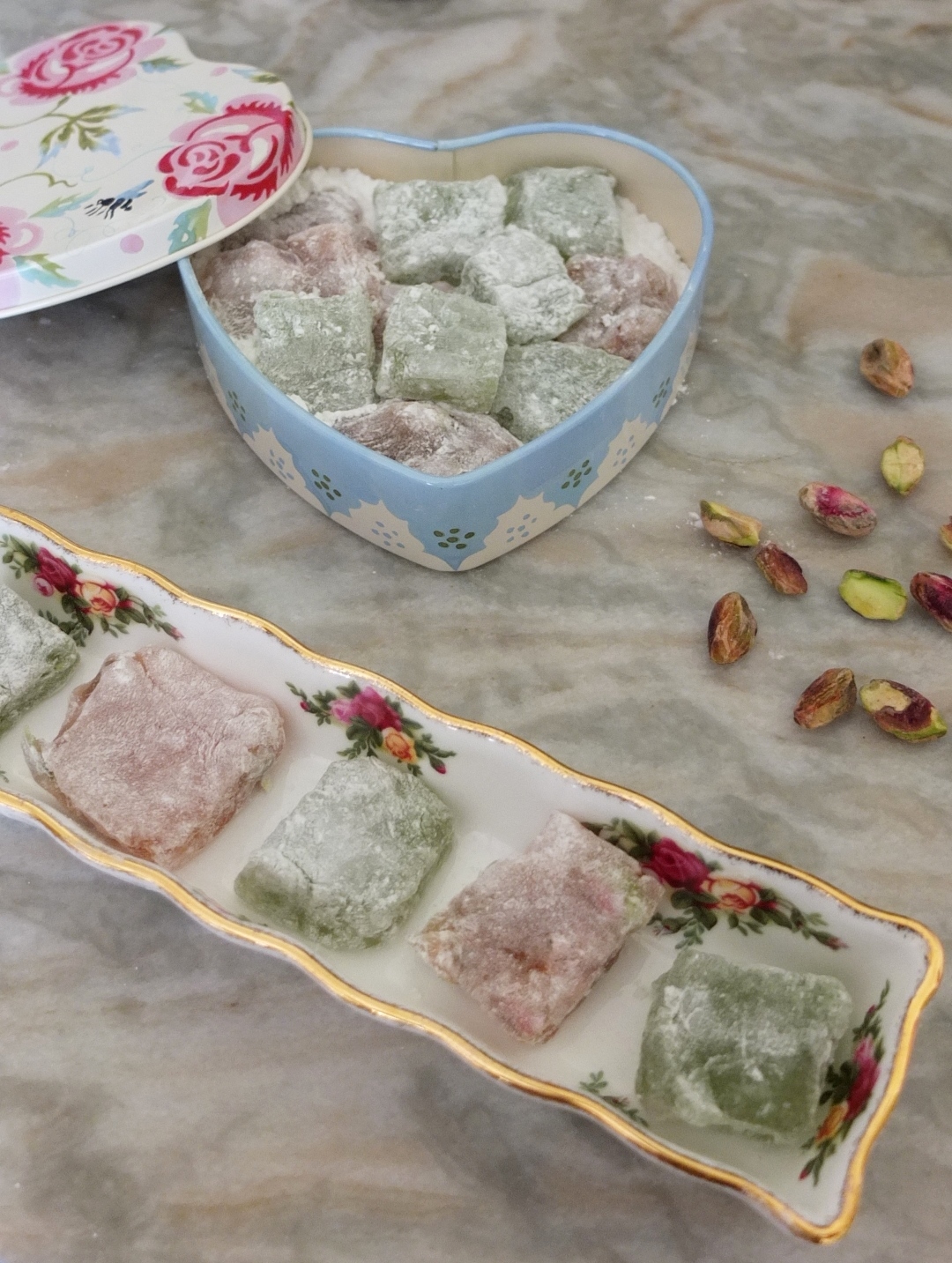 And can you imagine them in the past?  The origins of Lokum are disputed but the word comes from the Arabic Rahat Al-halkum (راحة الحلقوم) which means ‘Throat Comfort’.  They were originally sweetened with honey, a nice healthier version.  And apparently lokum was introduced to Western Europe in the 19th century, brought over by an unknown Briton who discovered it in Istanbul on his travels, became very fond of lokum and shipped crates home.  Called Turkish Delight, it became a major delicacy in Britain and throughout Europe for high class socialites who commonly exchanged pieces wrapped in silk handkerchiefs as presents!  Cool, huh?  One presumes the handkerchiefs were clean.

If you like, have a look at various versions of Turkish delight from the lovely recipes on the Daring Kitchen challenge set by Rachael@pizzarossa. 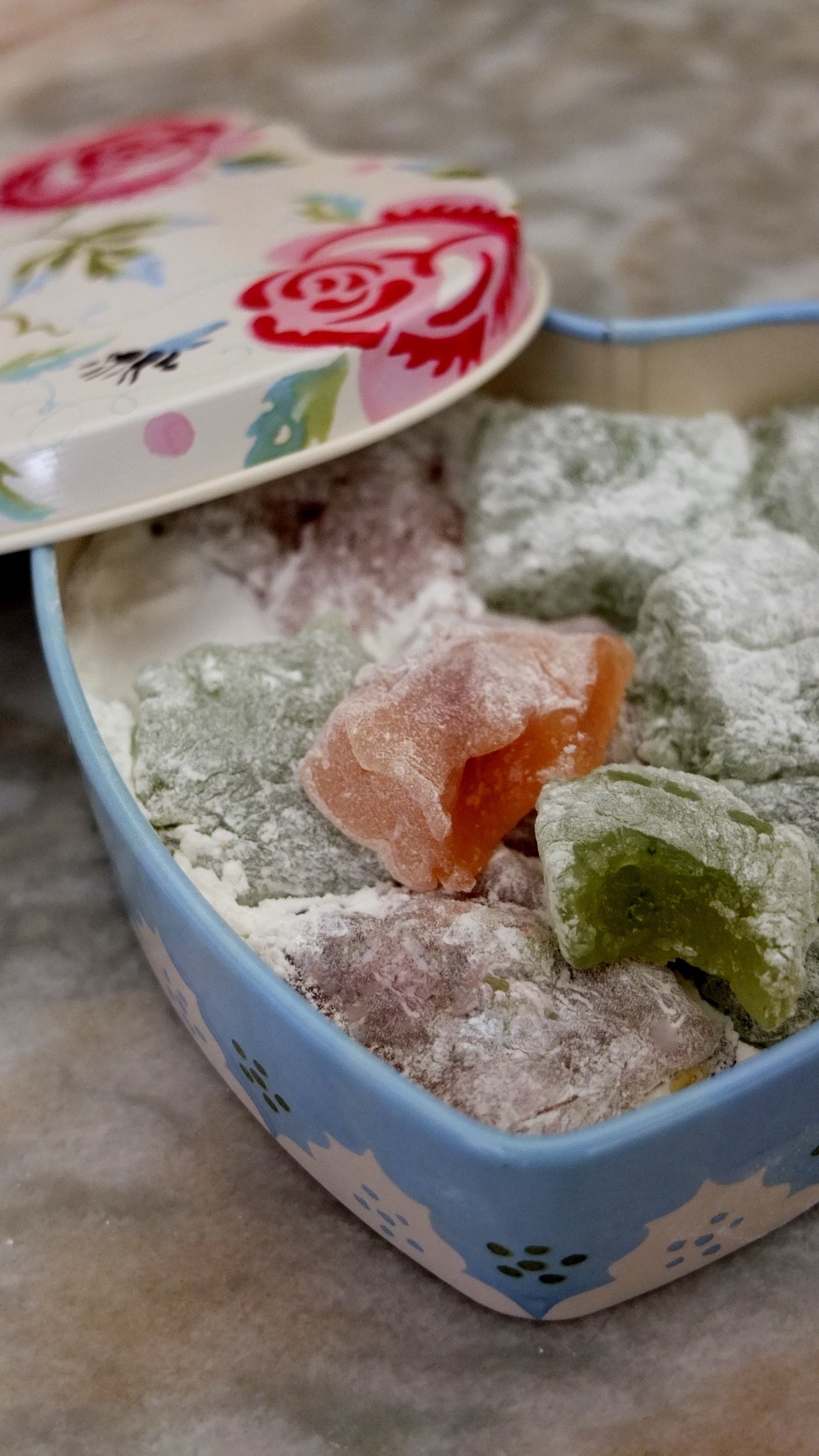 Thought I’d take these Turkish Delights to tempt people at these lovely parties:  Fiesta Friday hosted by Angie@thenovicegardener and all of us. 🙂  Recipe of the Week hosted by Emily@aMummyToo.  Tasty Tuesdays hosted by Vicky@HonestMum and Fabulous Foodie Fridays hosted by Lucy@BakePlaySmile and Lauren@CreateBakeMake.  Come along, check out all the wonderful food and mingle! 🙂 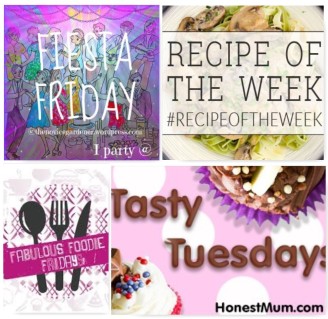 Finally, just thought I’d let you know that mum forgave me.  When my visit ended and I went back to Spain she sent a message saying she was now sleeping normal hours but missed all the kitchen activity with me.  lol and hee hee.  I’ll be back, as Arnold Schwarzenegger said.  Then he said, please help yourself to a little Turkish delight – honest!

Farewell very sweet readers!  And as they say in Turkey, teşekkür ederim (many thanks) for stopping by.  May you have an extra sweet and magical week that goes as planned so you’re not stuck anywhere you shouldn’t be at midnight.  Unless you happen to enjoy stealthy midnight snacking of course.  Happy baking and eating! 🙂 x

23 thoughts on “Rose and lime Turkish Delights (lokum) – a recipe for temptation and trouble!”